For a while now, I have wanted to create a longer-length brickfilm, and I finally have worked up the bravery to actually do it. I am making a castle-themed brickfilm loosely based on the 2000 LEGO line "Knights Kingdom", and other LEGO castle lines. The film has no name as of yet, because I am still working on the final touches on the script (I know, if I'm still working on the script, then it is technically pre-production, but since I am multi-tasking, I'm actually in the production phase).

You may have seen some pictures of the minifigures: Now before you say "This film isn't an original topic", I want to say that even though I am using characters that have been done before, it doesn't mean that the film isn't original. The story, environment, battles, and personalities are completely original (at least, I thought them up in my head, and didn't base this off an existing story).

I'm not going to tell you the entire plot, but this film revolves around the adventures of Princess Storm and Duke Exeter. This film isn't necessarily a comedy, but it may have some funny elements in it. It is more of a serious (though, not too terribly serious, it's a relaxed-type of serious) film with a great moral (and it's not a corny one either). It's got adventure, humor, and a little bit of romance (but it's totally family-friendly, don't worry).

I'm trying to make this film as good as it possibly can be, so I'm going to be asking questions here on this topic. Please give your critiques and opinions along the way, too.

So far, the character design looks good. I do think that the king's pants could be a different colour or have some detail to them.

LMDigital, he tried a few other legs and it was sort of a case were less was more, I remember the old one he was showing in the chat and I feel like the white looks a lot more royal over all.

Rio, look forward to hearing more about it, originality is not something I ever worry about, everything has been done before so you may as well do what you are excited to do, at least that's my philosophy.

How long do you think the entire film will be?
So far on what you got, the characters look nice!

Looking forward to this one, and I hope Storm's head arrives tomorrow!

Those look pretty cool. I really like the king. My only complaint would be that Princes Storms custom printings color and the way she go's from really skinny to really fat look kind of odd. But over all this looks pretty cool.

My only complaint would be that Princes Storms custom printings color and the way she go's from really skinny to really fat look kind of odd.

I'd really like to see dome more medieval adventure brickfilms.  I like the main character's design, although it looks like she needs a bit of a dusting.  I usually keep a paintbrush  around my animation space for quickly brushing off bits of dust on minifigures (it's never been used for painting, though).  I also keep an electric toothbrush (never before used for teeth, only LEGO) for getting that more hard set dust.  Both are really great to have.  I usually use the paintbrush before every shot.

The Duke's shield is really big.  Maybe a bit too big.  It looks like it would be really hard to haul that around.

Wow, I am getting more replies that I expected.

The script is coming along nicely, I am sketching up some concept art of how I want some shots to look, and working on improving the resolution of the film.

Thanks to Brickcrazy, Princess Storm has a proper face instead of that digital one I applied in the image above. The face is a bit damaged at the eye, but I think I can touch it up with a very fine-tipped Sharpie marker. Brickcrazy helped me get a head in life, and I shall be always thankful to him.

Here are some pictures of Princess Storm so far. I have a pony-tail variation and a long hair variation. (I know that the hair pieces are different color, but cannot help that. They will be seen in very different scenes, so it should probably not be a problem): 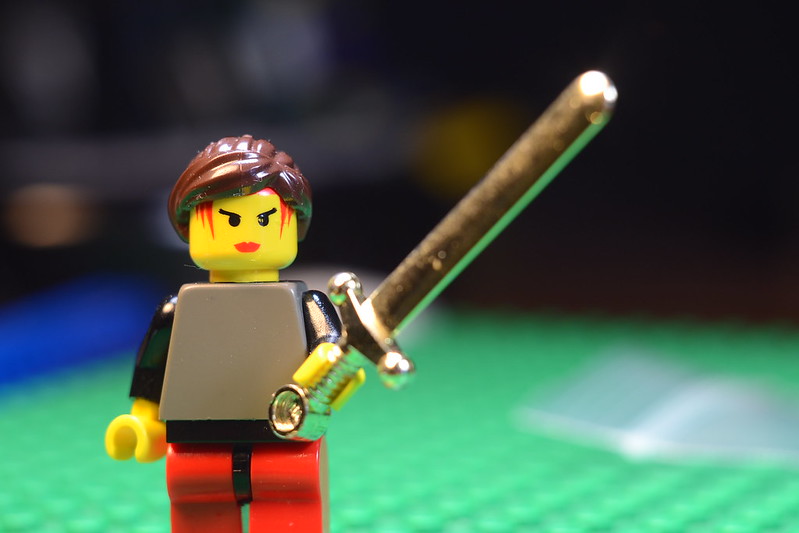 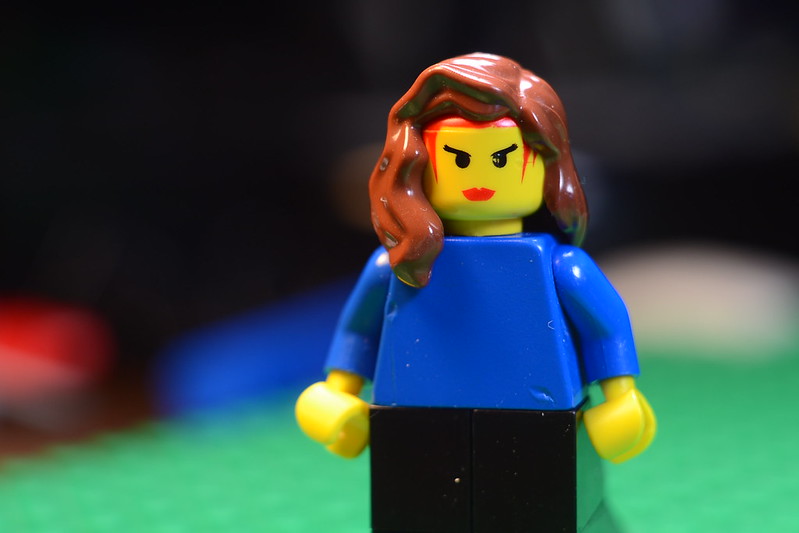 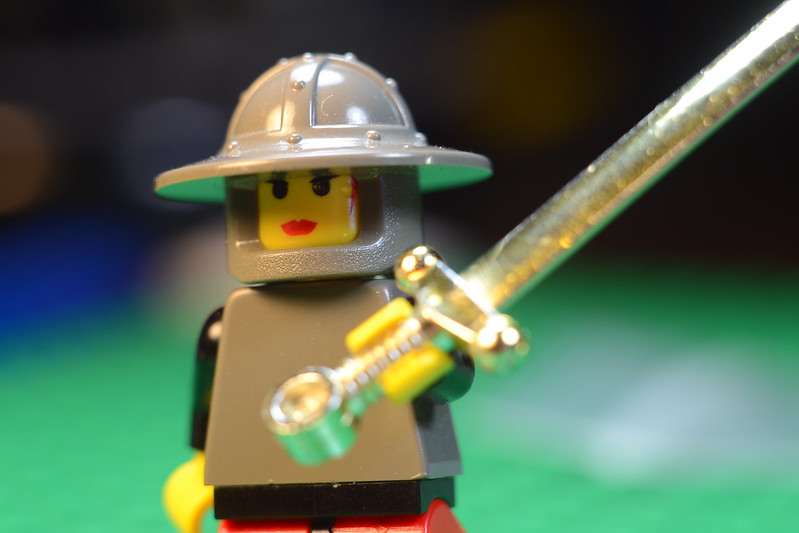 @rafael9522 I am unsure how long the film will run, from my script, it seems as if it will be over 5 minutes, maybe ever reaching up to 10.

@osomstudios Nathan is right, that is based on an original LEGO torso. Though, I do not own the torso, I was thinking of printing it as a custom, so I modified it slightly, but the proportions are still the same.

@Squid Yes, I always dust off my bricks before animating, I just did not for the picture. I'm not sure what's on Princess Storm's arm. I will probably have to clean it in water to get that off.

Chips on the blue torso and a scratch on her left eye.  I don't care - but I know others will say it so - I'll say it first.

I consider your work some of the highest in terms of animation quality (smoothness, natural movement, lighting) so I'm really looking forward to this.  I just ask that you take the time to find talented voice actors and not use someone like ... your mate, or neighbour, for example.  A little part of me dies when I see great animations coupled with well meaning but sub-standard voice actors.

I don't think you should use the long hair version at any point.  It doesn't look as good as the ponytail, it doesn't really fit, and it also makes it somewhat more difficult to rotate the head.  On top of that, when you do rotate the head it looks kinda awkward because the hear does not move with the face.  I did a shot like that for Bank, but I began to wish i can used a different hair piece in my collection afterwards.

Agreed about the hair.  It is best kept in the bottom drawer and only used for background characters and extra's.  In other words, use it on figs that do a lot of standing about and won't need to turn their head.

@togfox The blue torso chips (bite marks, I think) won't be there, because I'm using another torso for the final design, but the head will be slightly damaged, obviously, because damages are hard to fix. I am going to touch up the eye though, like I said.

@Squid The long hair plays into the story. Without giving away too much, the ponytail shows her rebellious streak, while her father commands her to wear her hair out. I wish I had a different piece, though, so it didn't have to be on the shoulder.

In other news, I probably won't be printing that custom slightly modified Princess Storm torso, because I just ordered it (along with the visor and other things) off Bricklink.

I have added a cape to Princess Storm to give her some extra awesomeness. Here are a few pics. What do you think? 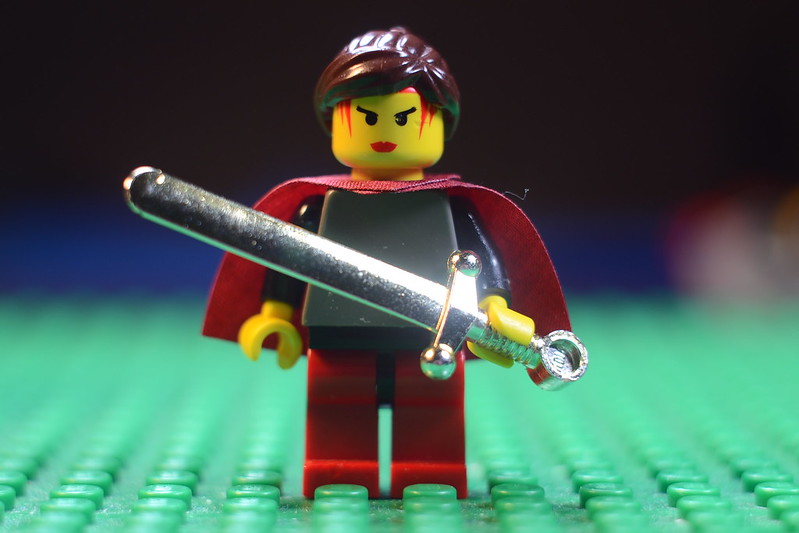 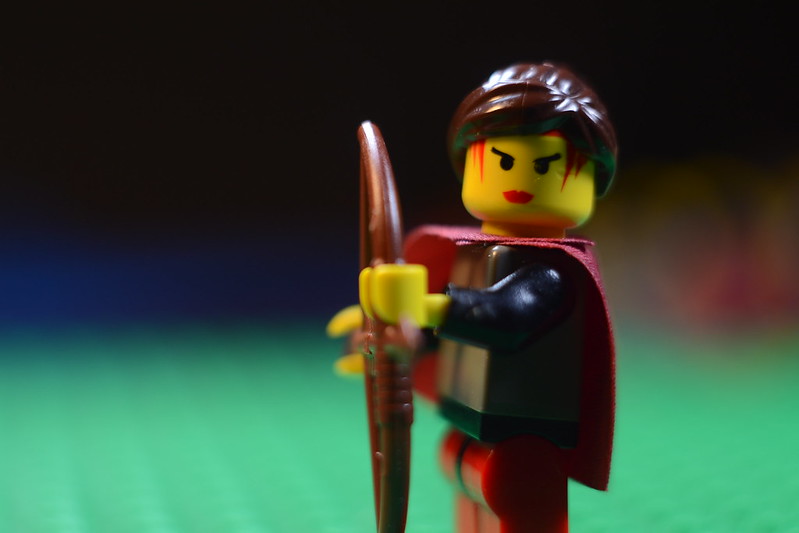 Is the cape hard to animate?  Will it "flicker" a lot?

Thanks to Brickcrazy, Princess Storm has a proper face instead of that digital one I applied in the image above. The face is a bit damaged at the eye, but I think I can touch it up with a very fine-tipped Sharpie marker. Brickcrazy helped me get a head in life, and I shall be always thankful to him.

Happy to be of service!

Is the cape hard to animate?  Will it "flicker" a lot?

In the first photo, the printing has been added digitally. I'm pretty sure he's waiting on the real thing from bricklink.

BTW, I must say, she looks AWESOME with the cape!

In other news, I probably won't be printing that custom slightly modified Princess Storm torso, because I just ordered it (along with the visor and other things) off Bricklink.

I have repaired the eye on Princess Storm to fix the tooth mark (Sharpie marker is truly a tool of magic). Though, you will see a glare on her eye because of the indention caused by the toothmark, but the yellow in the eye has been covered up. I also did some animation tests last night. I am working on arrow shooting, and sword fighting. I used a brown "stick" (a.k.a. light saber blade) for the arrow to simulate motion blur (also because I only have chrome silver LEGO arrows).

All critique is welcome. I am not happy with the sword fight, so I will keep working on it.

I think the arrow would look better if it didn't start so far back on the bow, and if there were less pictures it would look like it's moving faster. I liked the effect when it hit the target, nice!

The arrow is definitely moving to slow, especially for the amount of momentum it had when it hit the target. I think it should only be in the air for a few frames, moving a great distance between each frame. Sword fighting is very hard (which is why I've stayed away from it), but I think the swords should have a bit more mass, and the characters should move their arms in more broad motions. The best thing you can do is watch a bunch of sword fights, and try to mimic the movements you see.