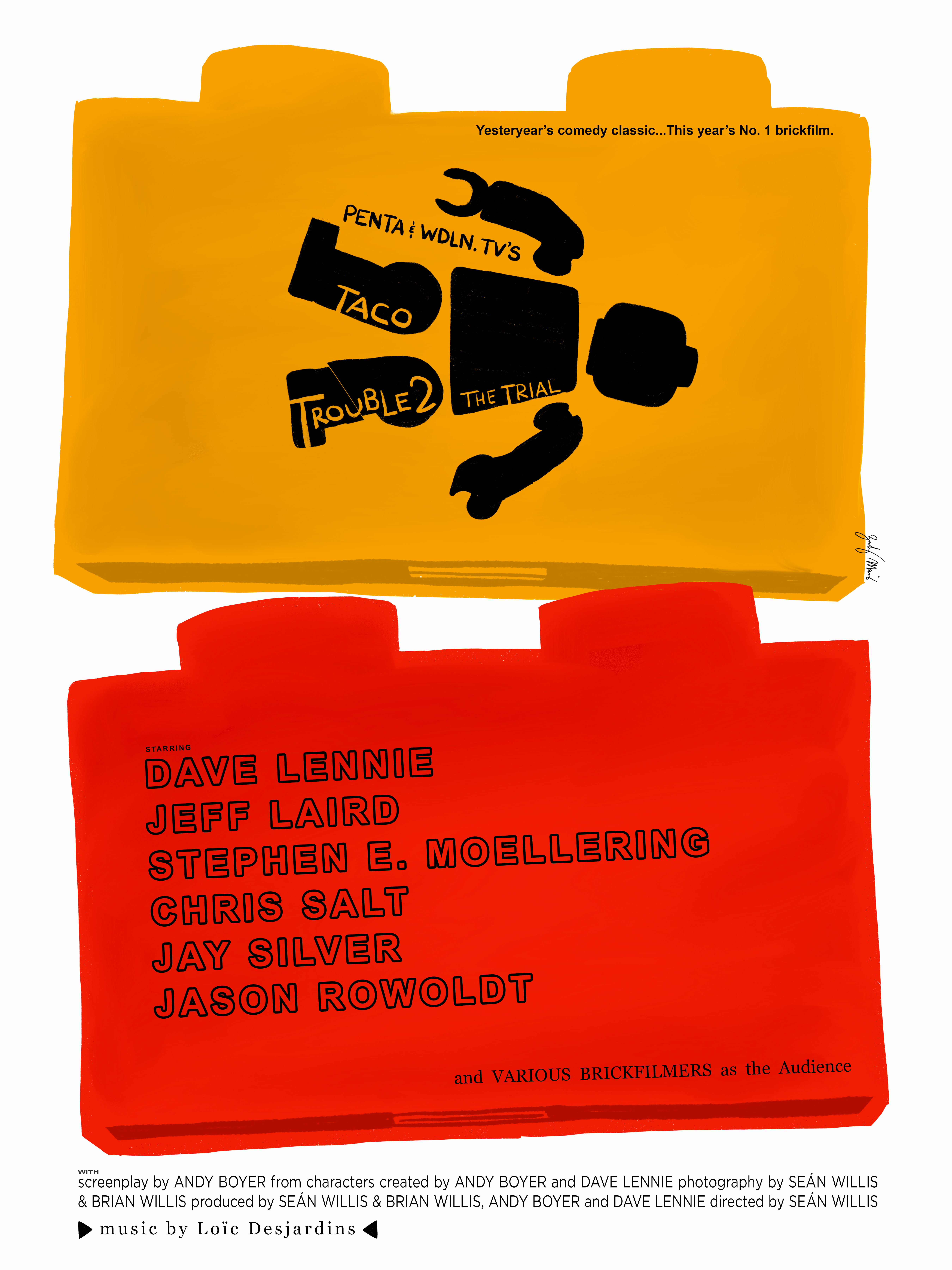 In 2018, over 15 years after allegedly committing five heinous murders, two amoral men lacking strong convictions or regard for truth are put on trial, and will freely adopt any line of reasoning if they feel it will work in their favor.

This is a film we have produced in collaboration with Andy Boyer and Dave Lennie, and is a new brickfilm in their series featuring the characters Biff Feedback and Mario Stradivarius; a series which dates back to 1989. This is the sequel to our favourite brickfilm, the 2003 Biff and Mario film 'Taco Trouble', and it has been created using a script originally written in 2003 (and slightly revised by Andy Boyer in 2018). This film also contains a new, original soundtrack by old-school brickfilm composer Loïc Desjardins, who has a YouTube channel with more music here.

Here is the link to watch the original Taco Trouble: https://www.youtube.com/watch?v=seeX8AWOPfA

Here are the links to watch all of the main films in the series. The more you are familiar with, the more little details you will notice in this film. Some of the older films may seem slow moving, and some moments are, shall we say, of their time, but if you give them a chance, you may love them like I do.

This film utilizes the actual, original minifigures of Biff, Mario, Doktor X, and the henchman, and also features the digital mouth animation shapes created in 2003 for the original Taco Trouble, all of which were sent to us by Dave Lennie. Something agreed upon at the start of production was that it would just look wrong for Biff and Mario to move at a more modern standard of animation, so we decided to shoot the film at 24fps with the camera moving on ones (24fps), most characters moving on twos (12fps), and Biff and Mario moving on threes (8fps), with Biff and Mario's movements also kept to basic gestures reminiscent of the original films.

Conversely, something else we agreed upon was that other technical qualities ought to be brought up to date, rather than making a film masquerading as being older than it actually is. Andy Boyer suggested that the more serious the setting was made to look, the more it would heighten how ridiculous the events taking place in it are, which was a notion I quite liked, because I had just wanted to build a fancy set for extra swag. Given that, unlike our other films, we did not create the script or much of the audio, we made a concerted effort to step up our game for the set design, cinematography, and animation.

The sets were amazing! Not just the sheer size and detail of them, but the design as well. They all looked very realistic and at the same time still very "LEGO", if that makes any sense

. I also really liked the overall look of the film. There were a lot of neat compositions and camerawork in there – the cinematography was top notch.

The animation also worked really well: I loved that Mario and Biff were animated on threes, it was great with the absurd humor of the film. I also really enjoyed the animation of the monkey, it was very well  done: I'm trying to animate a same kind of LEGO monkey in my upcoming brickfilm so I know that it's extremely hard

There were a lot of funny moments in the story, and I enjoyed the throwbacks to the original Biff & Mario films, even though some of the jokes were a little bit too scurrilous for my taste

So all in all fantastic job, I have huge admiration for everyone involved in this production, because this film has the makings of an instant classic!

Wow, that was hilarious!

Beautiful sets, great cinematography and animation. This proves that you can make a very good brickfilm without any action scenes.
Now, we understand why you spent so much time on making this... and it was worth it!
Great job, congrats!

That was amazing! I was genuinely stunned while watching it! I love the comedy, the animation, the minute details, everything! Hats off to everyone who worked on this!

Hey, this is my signature. My youtube channel is here: https://www.youtube.com/bosskinglegoproductions

I have some big words for a major brickfilming milestone:

For me what makes it work on more than one level is how it looks back on the gruesome events of Taco Trouble one (2003) with a critical eye while absolutely cherishing the legacy.

The one from 1989 looks so rough that it can't have been the pinnacle of brickfilming of its time. This new instalment on the other hand, has such a great ensemble bringing their best efforts. I wonder if Taco Trouble 2 will look archaic in 30 or 40 years time. At the rate that the standard of average brickfilm is rising it just might lol.

5/5 a must watch. Before reading watch this movie. Watch it again. Watch it until to laugh at it seems like an insult to such a masterpiece of not only: comedy, writing, animation, cinematography, set design, lighting, shot composition, editing, voice acting, sound design, but a whole other slew of film terms I don't even know exist.

Let me start by saying, you cannot compare this to the other Biff and Mario films. In any regard. Not only is the animation, sound design, and writing, (to name a few) completely different. But the overall quality is superb and completely unwarranted in casual brickfilming at this time.

The writing. Once again Andy Boyer delivers. The comedy is right up there. Biff and Mario are their usual selves in a new scenario. Even in this serious environment they manage to compose themselves and nearly come off as the most professional in the courtroom, all the while maintaining their indelible perverted-chauvinistic charm. With that said, it is now clear that such a film could not have been able to really thrive if made all those years ago. The casual medium of brickfilming was not knowledgeable enough to produce a story that is so dialogue drive; especially in the style of Biff & Mario. The real compliment I can give to the script is, after 18 years it manages to hold its own and stay humorous and fun. All in that trademark Biff & Mario style.

The animation, lighting, and set design is beautiful. Truly beautiful. I can honestly say I have never seen a better looking LEGO stop-motion film. I meld these three things together because in the film it is clearly noticeable how these three elements interact. One example being, Biff jumps onto the stand, walks over a minifigure, with the lighting pouring in over the characters, emphasizing every movement. The light hue that somewhat follows Biff and Mario around is one of the nice subtle touches. Mr. Jingles' movements end with him slightly bouncing, each movement having a fallout. Every shot with that stain glass window looks gorgeous. The way the man with the spear walks down the stand. Dr. X has a wobble as he walks, contrasted with Biff and Mario's slower frame rate walk where they just kick their legs around.

The camera work was magnificent. It is one of those films where the more I watch the more, the more the phrase "every frame a painting" rings through my head. The use of the split diopter shots perfectly encapsulated the scale of the set and the balance of the frames. Looking through the crowd up to the stand. The pans and swings that were used sparingly throughout the film was beautiful. Most of all, filming on 24 for movement, 12 for characters, and 8 for Biff & Mario perfect choice for solidifying that feeling of old and new animation.

Penta it was up to you to decide how  Biff & Mario were to be brought into the present day. The producers were right to decide that it shouldn't try to mimic the style. But even with fancy animation, a good script, and nice looking bricks it's the little details that really sell this for me. Biff & Mario was a couple pieces of LEGO spread out on a carpet or sheet and then animated upon. It was up to you to decide how to fill in those gaps. Nobody said that the colour palette should be nice and vibrant. Nobody said the effects should be practical. That the backdrops should be sheets.  You were given the tools and a blank canvas. From it you painted an institution that will go down in brickfilming history. I am not just happy to have a new Biff & Mario film, I am happy that you got to make your dream come true. That you got to push your limitations and succeed. I am proud of the work everybody put into this film.

When I watched this film, I got shakes. I felt happier than I have in a while watching a "legomation". I felt like a kid again being treated by a brand new episode of Biff and Mario. I thank this film for existing, not only because it is a piece of art, but because it inspires.

As you can see I have nothing good to say about this film. I hope you never make such a disgusting piece of work again. Thank you.

Thank you, Taylor Swift from Cats.

I remember seeing behind the scenes pictures in early 2019–it's great to see the finished film after over two years of production.

The writing and visual humor complement each other very well. Additionally, it was great to see David Lennie reprise his role as Biff and Mario. My favorite scenes are definitely with Mr. Jingles. The voice acting and animation are a wonderfully hilarious combination.

All the subtle details, such as the camera movement, window lighting, and details of the court room set elevate TT2 to a whole new level of brickfilming.

Your hard work certainly has paid off. Great work, Penta.

Really great job, Penta! Thanks for inviting me to be a part of it.

Thanks, everyone. I really do appreciate the great response this film has gotten; it makes me feel like I guess maybe I will eventually make another major brickfilm project again. Behind the scenes photos are now available here.

What an incredible brickfilm. The set design, the lighting, the animation, the mouth animation, the camera techniques, the voice acting, the comedy, the script, the editing, the sound design. It's all perfect. A true brickfilming treasure.

I also see that the crew consisted of a lot of cats.

Youtube
As a mortal, I was called by the name Duffcow56. That time has passed. I am now Duffosaur, ravager of worlds. Look on me and despair.