As this is my first post I just wanted to make a quick note, I AM A HUGE LEGO FAN!!!

However due to the little space in my house for an stop motion studio, I decided to go digital!

The image below is made entirely in Blender, the shot was taken with rough 6+- hours into it. ( about 15 minutes to render per frame, though I am not done optimizing, also the background is just a flat image, not actually 3D)

I would love to see what you think, and most of all some story ideas! they need to be fairly simple as rendering can take a very long time! 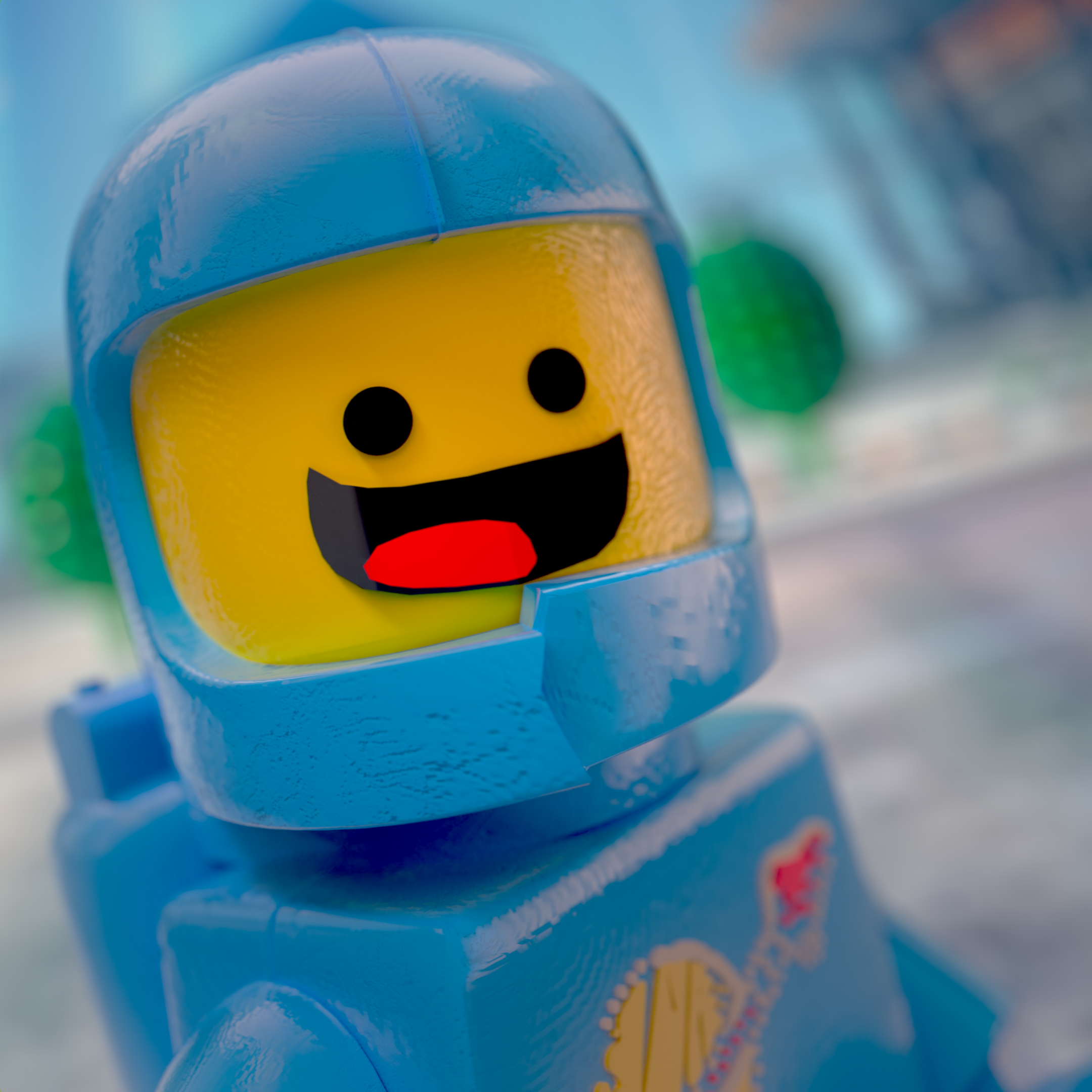 Neat! Did you model the Benny minifig?

Yep! The model was converted from LEGO studio 2.0, then I built a new mesh based on that (the studio mesh was not well designed for rendering) then finally created the materials and textures and threw the whole thing together. 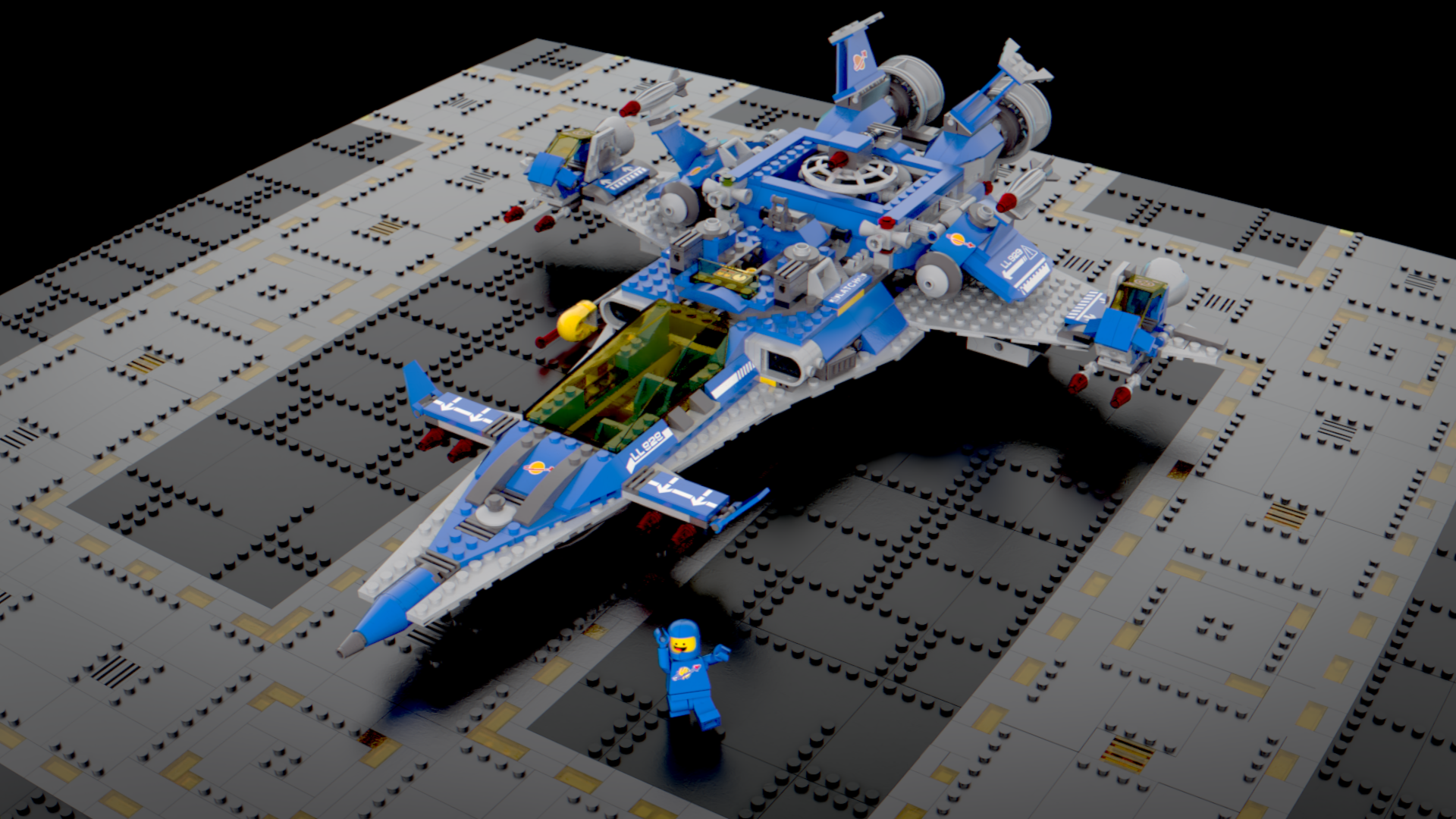 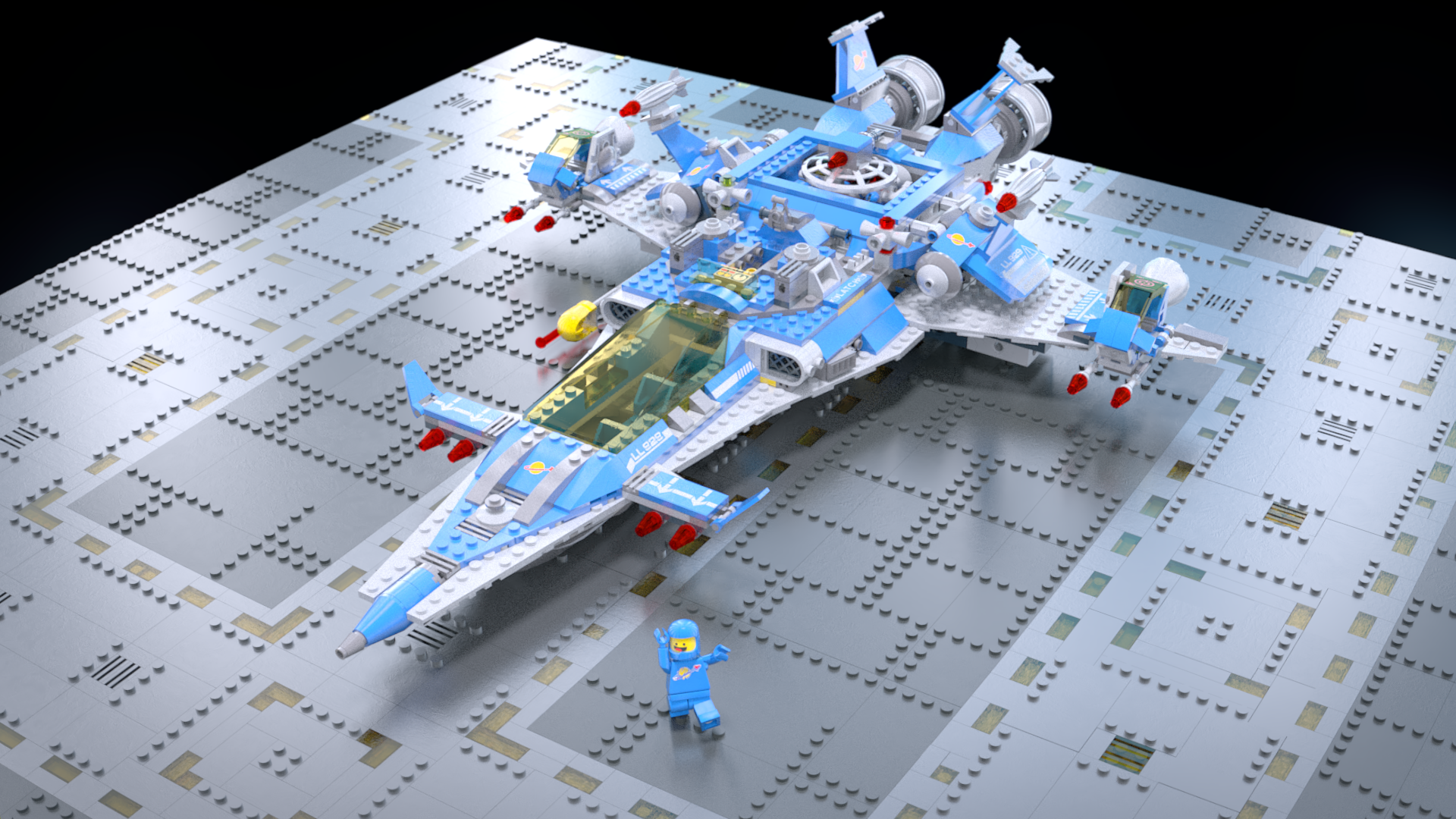 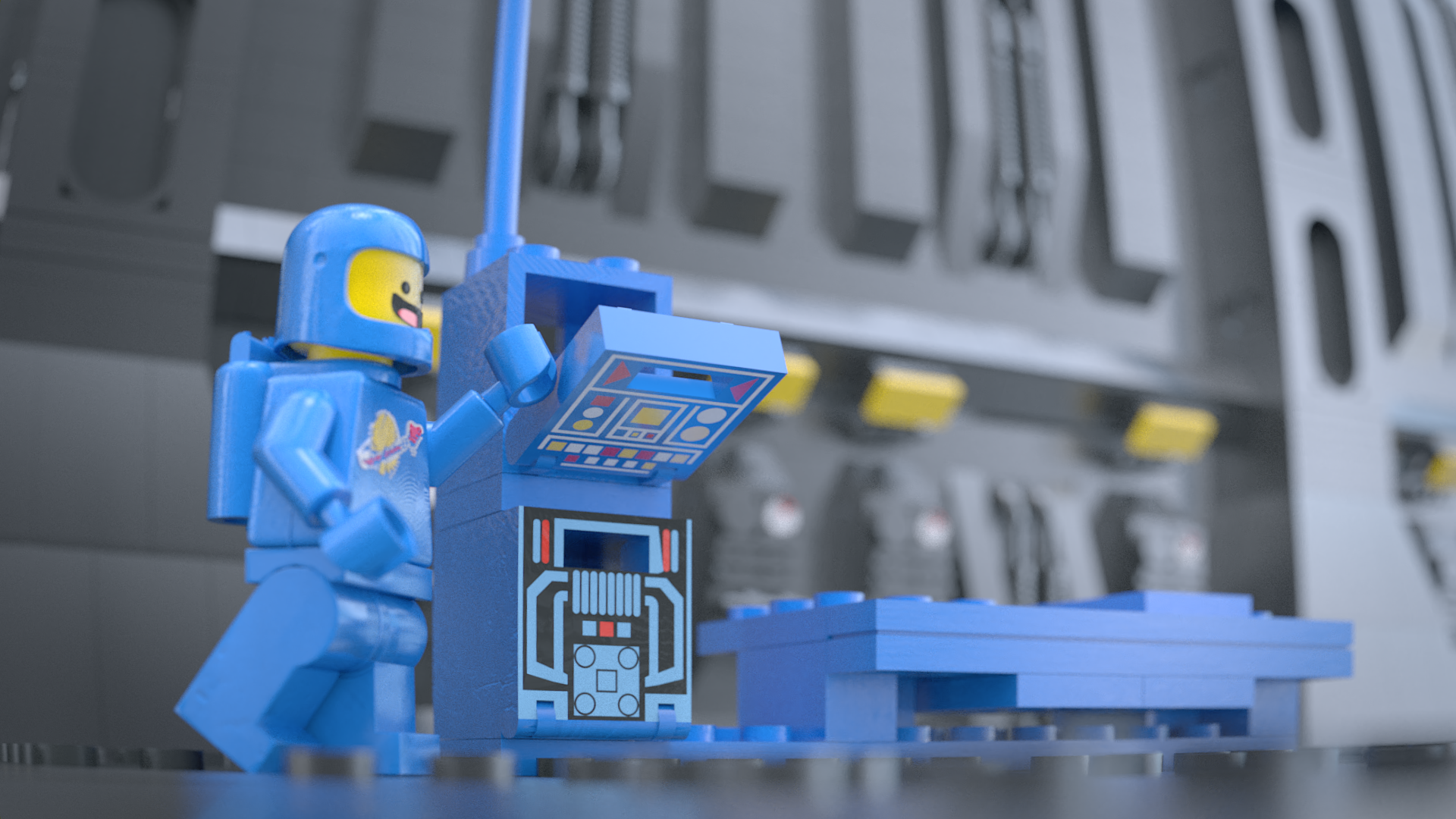 That's really nice! IMO the wrists of the minifig are a little bit long. Great lighting! It looks like you've got one strong computer!

Lego Benny was just shown as a website banner over at blendernation.com !

I should have more news on the project this weekend.

Hello all, here is the latest.

The critical issue is a script right now. Which is not written. this is a problem.
Buuuuuut I do have the idea in a firm hand on what I plan to do for a first film.

Currently I am just building the assets and converting them to Blender for posing and materials.
I am also working on upping the quality of the lighting, as some properties of plastic are being ignored.
Below is the latest and greatest, the first is just how the model came into blender with little clean up. the 2nd is today's image, all cleaned up and animated. 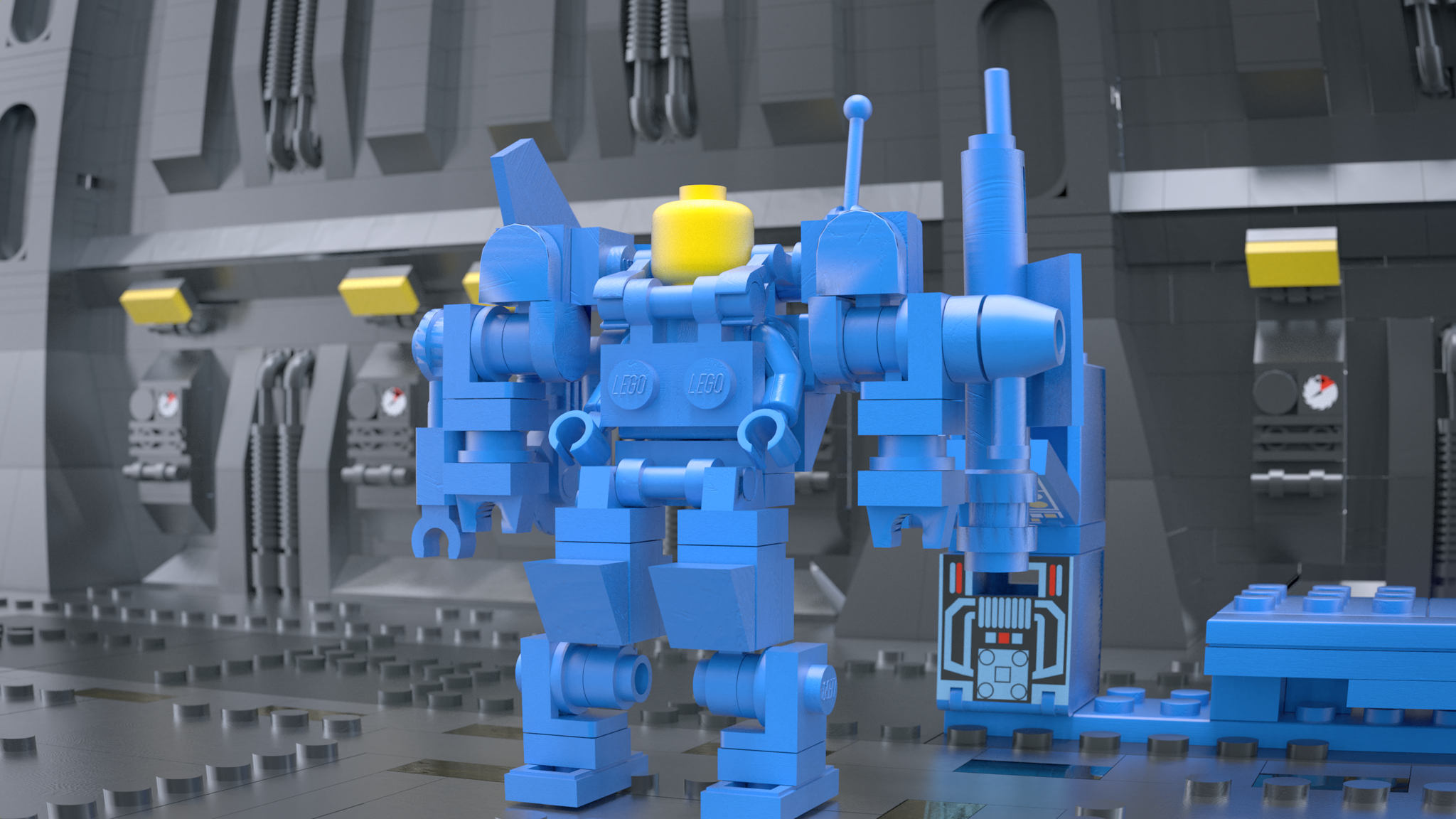 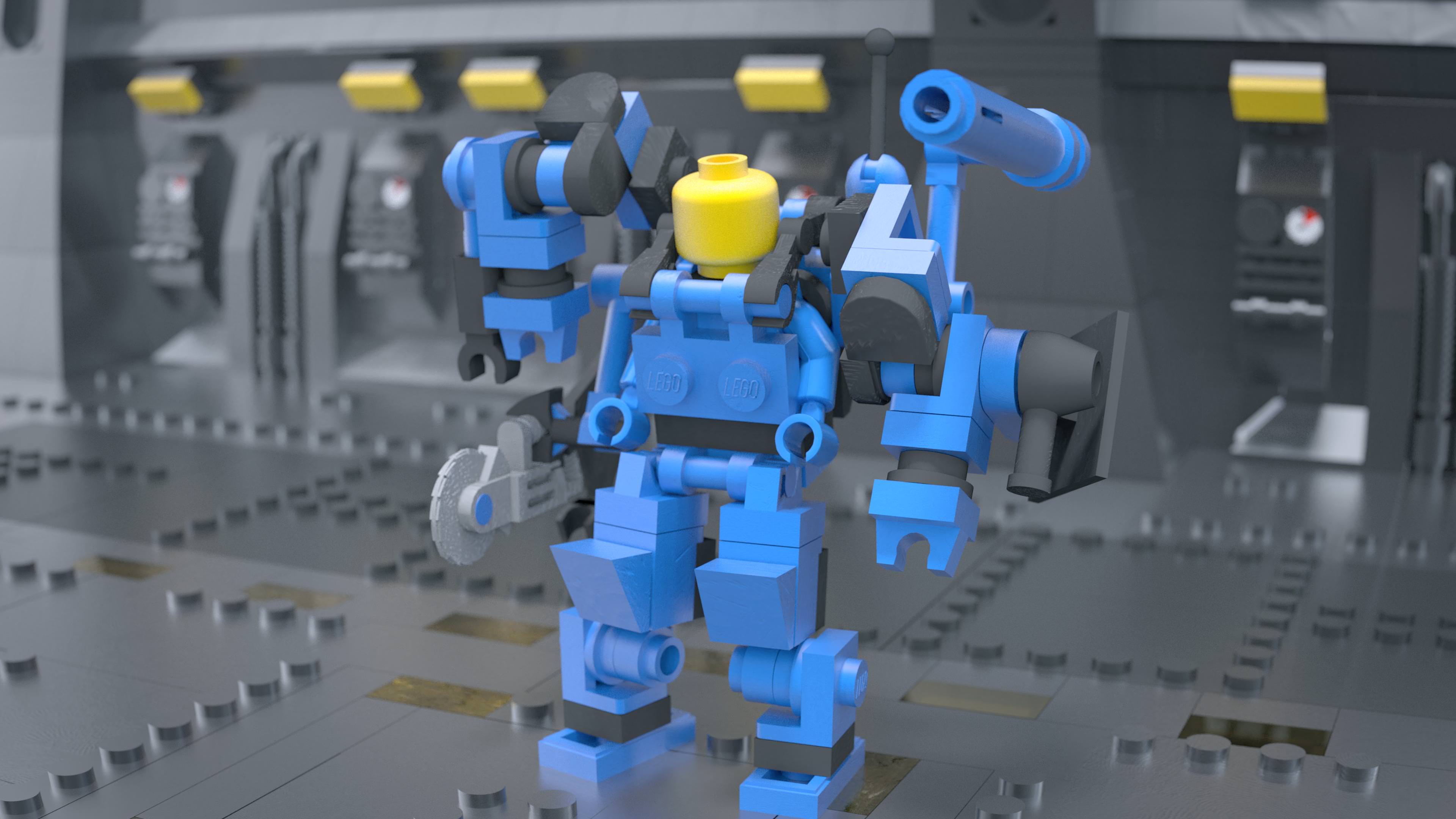 As you can see this is a massive improvement in the materials & model armature. It's not finished, however I do want to keep parts of the project under wraps just so that the plot isn't ruined.

As a question to keep this thread alive, can you give me some color suggestions? as well as ideas for variations on the mech suit.

Since its the Christmas week, I am off work until January 3rd!

So now its time to get up on my lazy game errrr...... productive hobby?


So here is the first scene I have: 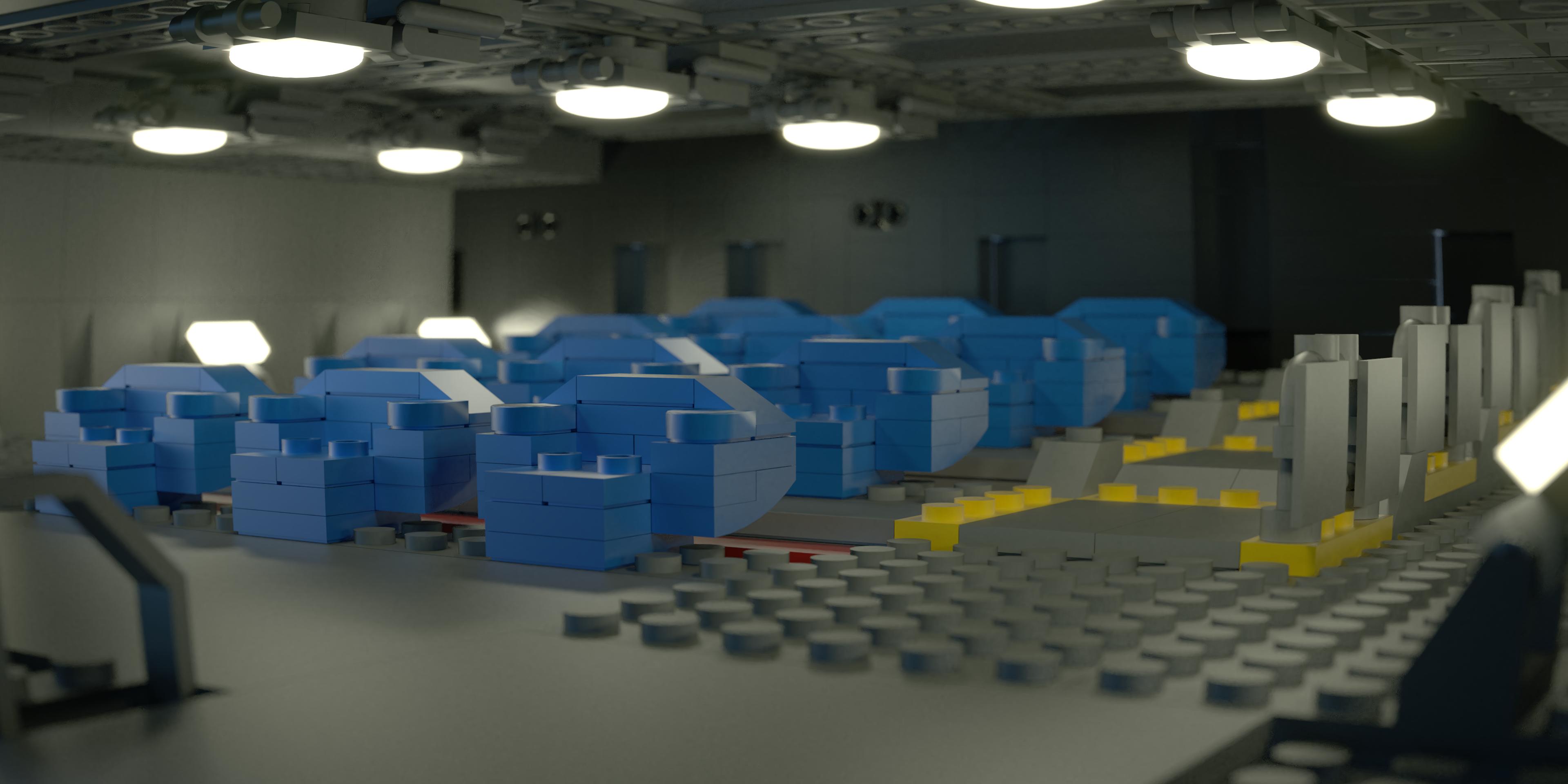 I know amazing right? And no. Its not a theater room. Its a.... well lets just say its going to be important

This image is also an extra focus on what the final image output will be like. extra layers adding glare to all of the lights were added, and in general dealing with all of the little things that help make a scene believable. If you think you see something in my images that doesn't look right, speak up! I can really use the sharp eyes to find everything thats missing. 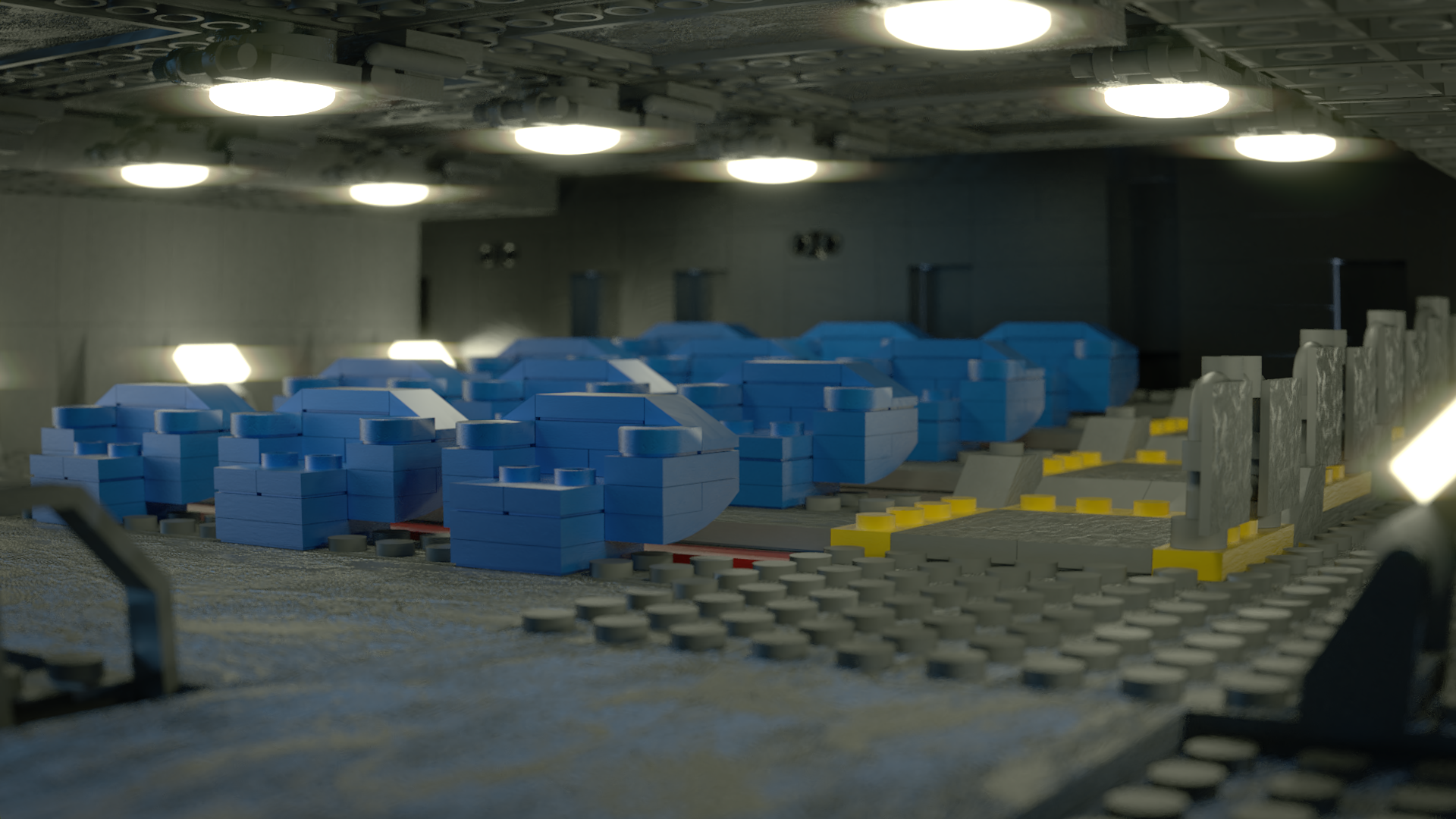 Ok its a bit much but its getting there... oh ya, and there are the lens glares... a bit much as well.

One of the issues with Blender is that lens glares are very picky, they depend on just the right amount of light, and the resolution of the screen messes them up as well. That being said, its better than image #1.

I am going back into my old sets to find spare parts to add to the asset library I did with an older PC, below is an example of a failed 3D project. And it just might work for what I have planned for this film. 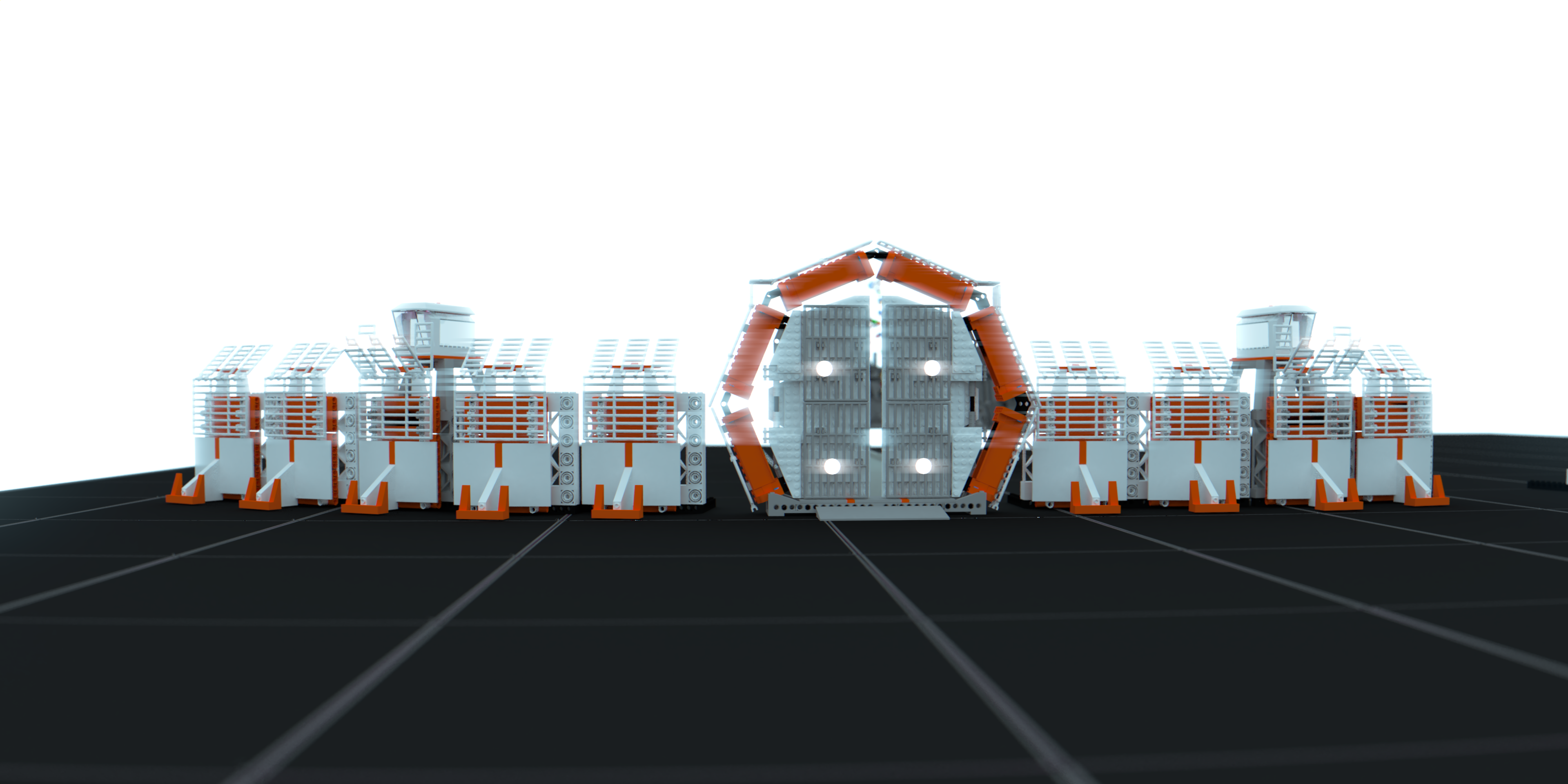 Speaking of which, what will this first film look like?

So right now I have 4 films planned, each one will be called a "chapter" (so chapter 1, chapter 2 etc..) The story will focus around a key theme, seemly random but loosely connecting together in each part, before compiling into an finish in chapter 4.

As it stands right now:

Goals of the film(s)

)
2. Very high quality. (rendered in 4K, high samples (low noise) good audio)
3. Help me! find volunteers to assist with asset creation and most of all audio editing. (I can handle video)

Thanks all, and I look forward to reading your thoughts.

THAC is closing in... and I have no way to enter digitally

Its a dry, dry desert out there, without a script, to see these words fall off the keyboard is like a drop of water in a hurricane!

heh.
Below is the next image, its a rough draft of outside the reactor room. To get in you need to break down these impressive walls and get through a large bridge. 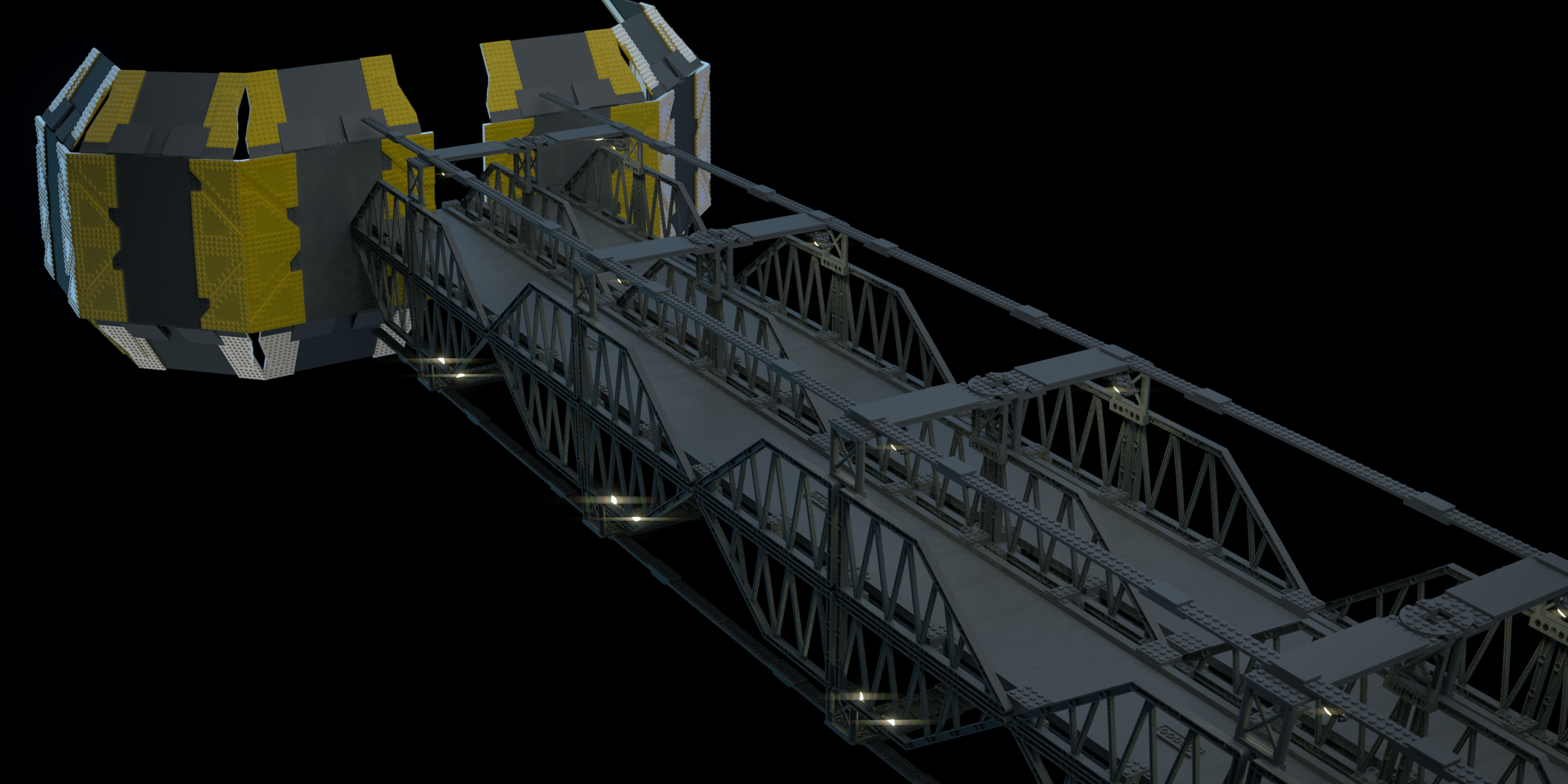 So yes, I need a script, check out the link below and enter yours!
https://www.bricksinmotion.com/forums/p … 9/#p379329
Please use the images I've posted in this thread as examples of where I am going with the project.

Another update to the project, the bridge scene is getting some friends, namely guard towers (with catwalks) & a new small space ship! 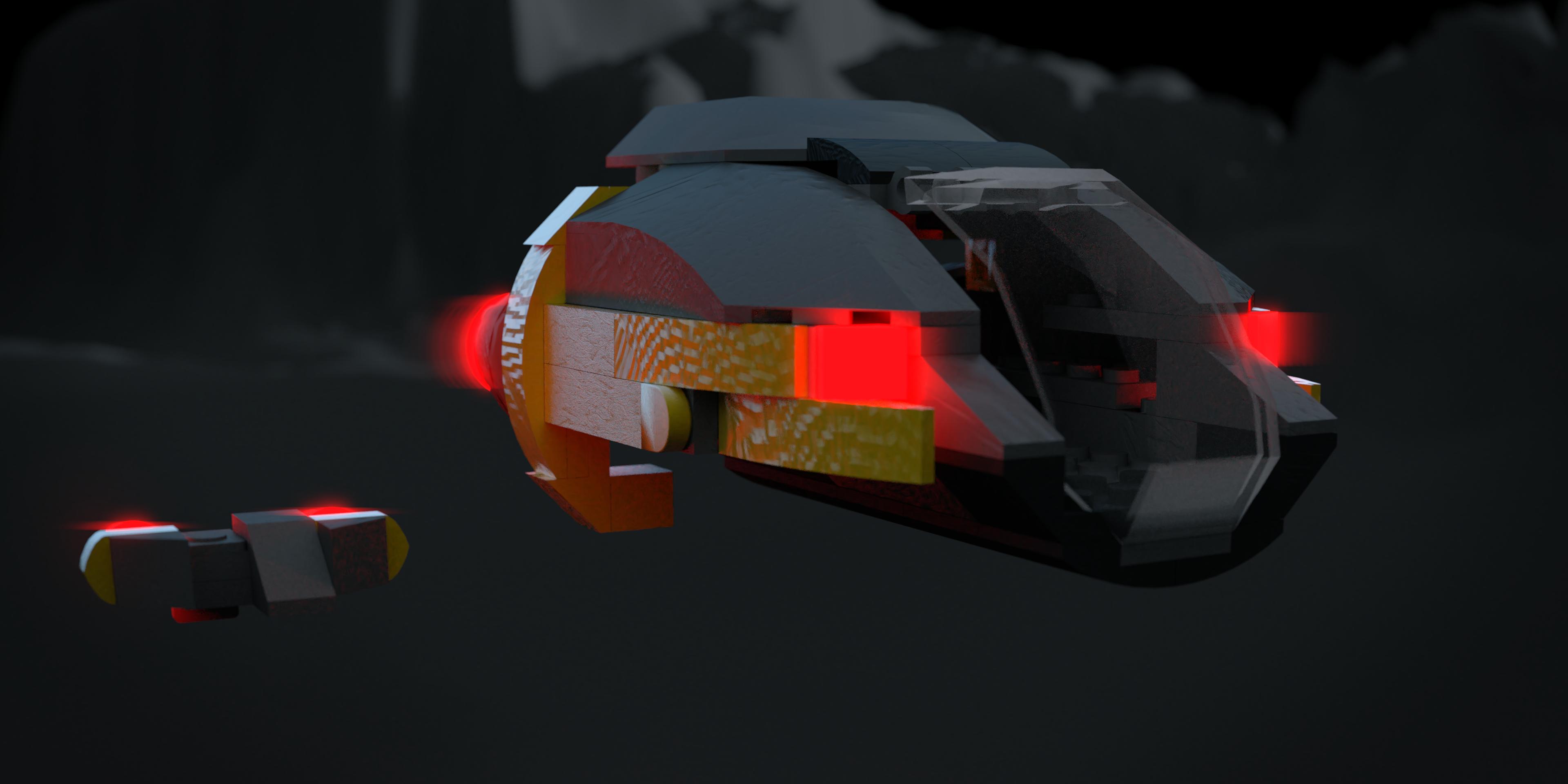 (The thumb prints are strong with this one) 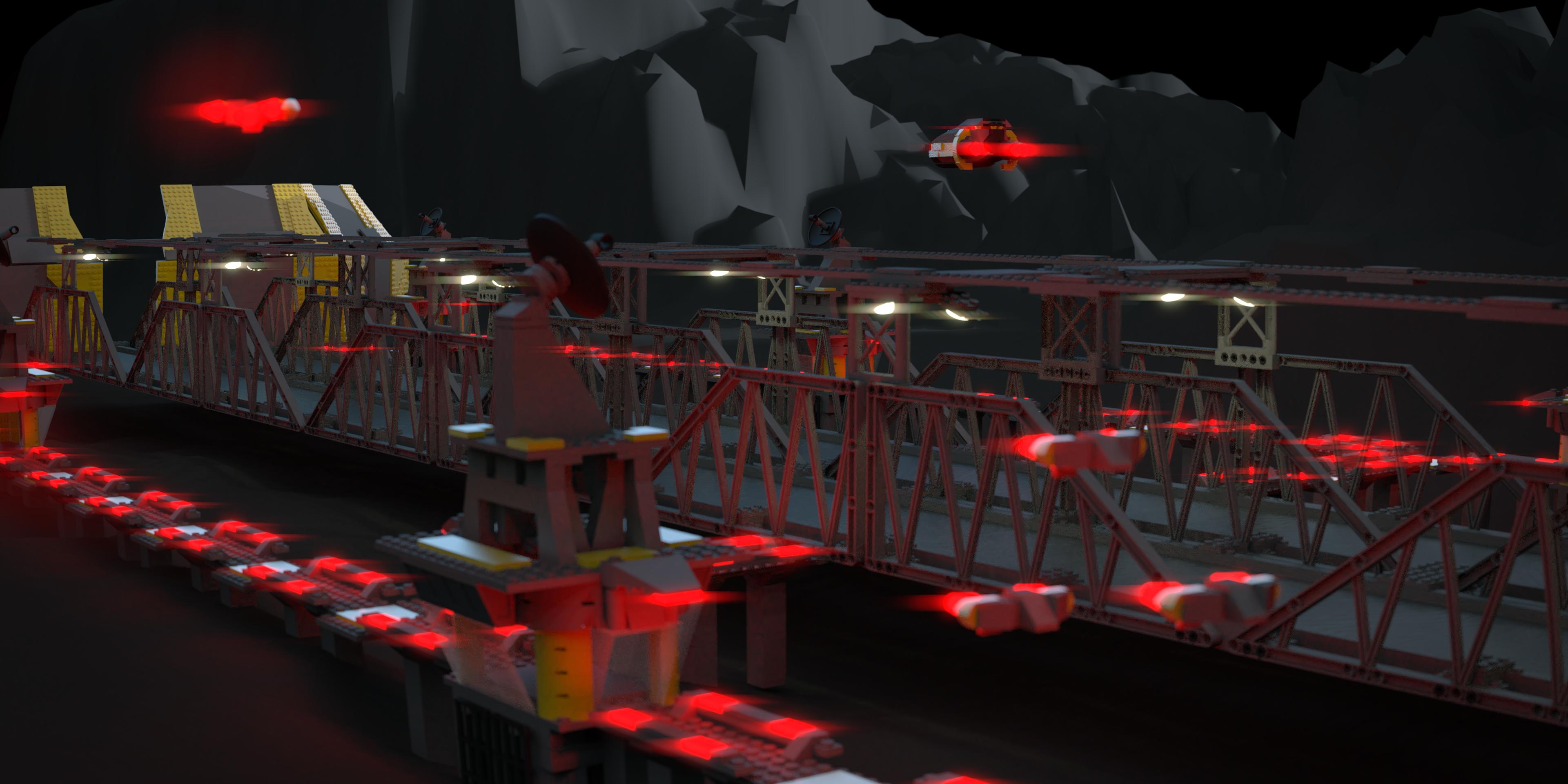 Lens flares are a WIP,  and its missing some motion blur which won't happen until production.

I really like the atmosphere of the 2 most recent shots! It's really turning out nicely. Can't wait to see this project once completed.

over at Discord Smeagol was really mean! He made me actually spend some time and FIX SOMETHING!
(Thanks mate!!!!) 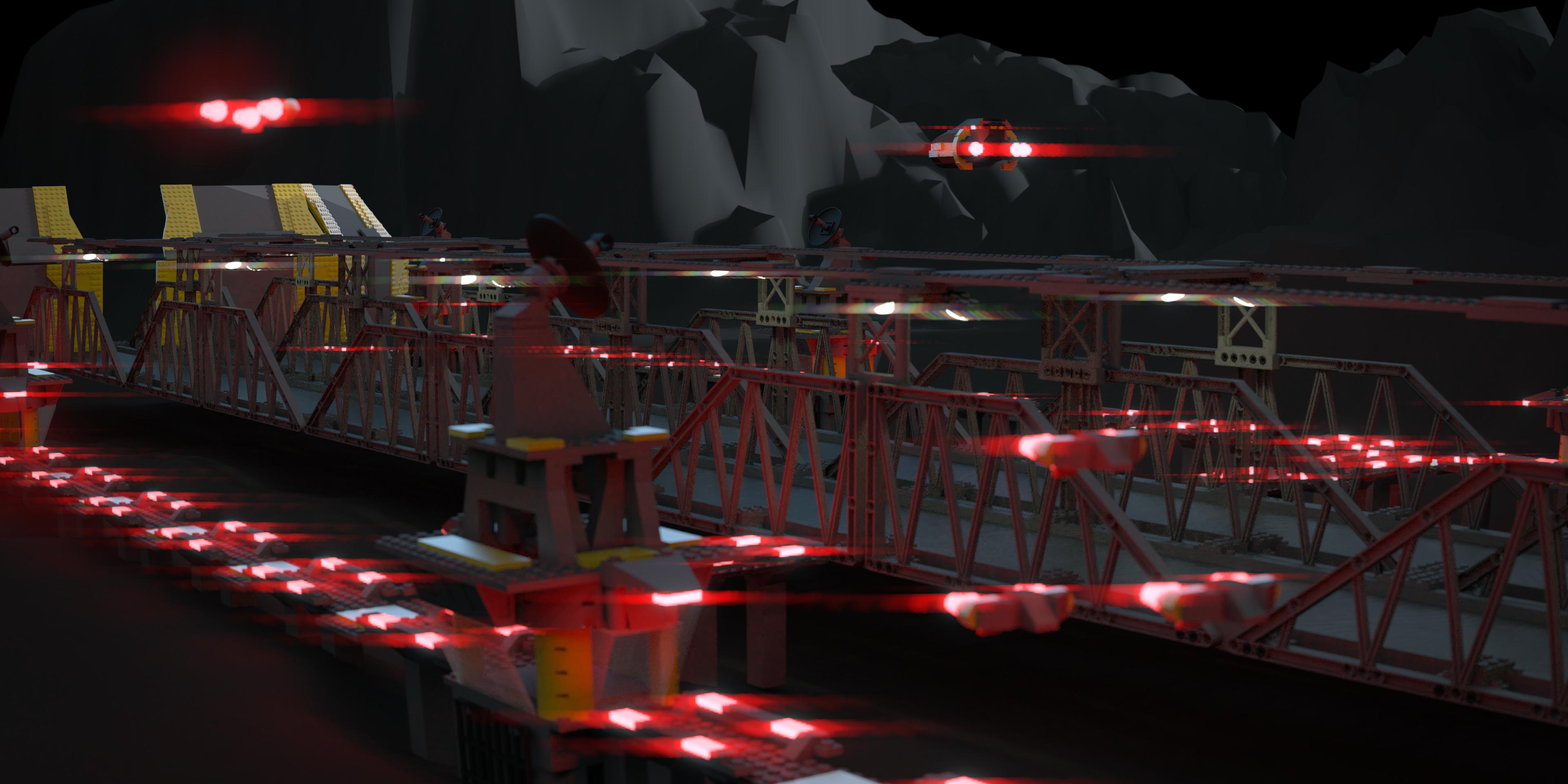 I really enjoy the red light. They are such a nice aesthetic.

Not sure what to do right now, but last night I put together a new gate piece, and created a "laser bolt".

I am nearing the end of what I can think to build before a script arrives.

The lasers are using a new type of emmissive material I set up, and it should help with making each bolt unique instead "just a cylinder on fire". The one last thing I can think of is to figure out how to highlight the ship in the middle-ground from the background.

Also I've worked a little bit on the smoothing of the frames a bit more. It does lower the light accuracy, but the image is not nearly as grainy as it has been in the past.

At this point I think its time to start punching in frames and animate basic slides. Perhaps even create "matte" backgrounds to speed up rendering in the future. Never done it before though. 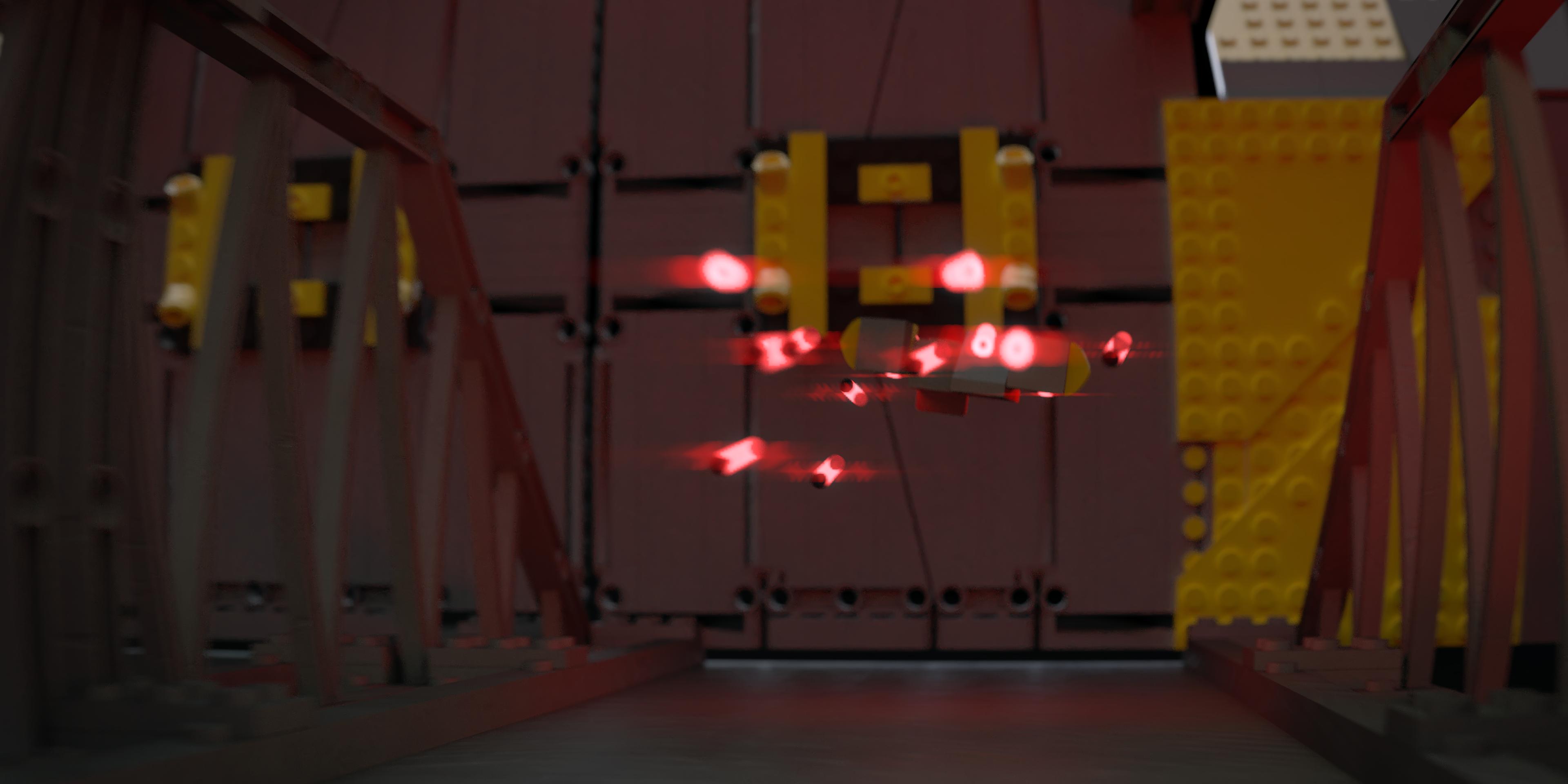 Going J.J. Abrams with all that lens flare, eh?

Its been 8 days since my last update, and really thats two weeks worth of content to update you all on.

So lets get started.

Firstly, the bridge was finally animated & rendered at 4K, 16 fps. This was a test shot though and gaining the perspective of what a final product might look like.

Because of the level of time it takes to render out a video, I uploaded the first 5-10 frames rendered, and the rest through whats called Open-GL Viewport. All it really does is take a snapshot of what I see in the program, but its much easier than using snip 280 times to make a 16 second test shot.

I happened to get a comment on the video by a guy who knows how to use blender and actually does concept work for a living.
His name is Chris (I hope he doesn't mind me name dropping) and he works for a company called Evolver Interactive. They put together commercials for architectural projects/products, and he has been switching his team over to Blender.

So we got to talking, and he took a look at my scene and reduced the render times down from 20 minutes to around 4-5!
To put this in perspective, it would take roughly 13.33 days to render 1 minute worth of content, thats now reduced 0.67 days. It will now only take a week to make a whole video's worth of content.

And here is what he was able to send me!

Again I cannot say what a lifesaver he has been so far, and I look forward to working with him in the future.

So with this new found knowledge, I promptly went and did it myself, but with camera shake and some minor tweeks added.

From here I was given additional comments about the animating on Discord, with some ideas on how to better plan how the ship will "bounce" from bridge side to side.

Annnnnnnd that was last week.

This week was a bit low key.

The "theater" got its screen and the 2nd half of the scene was built. (lighting a WIP)

And that was basically it. One maxed to the floor week, and a rather chill week the next.