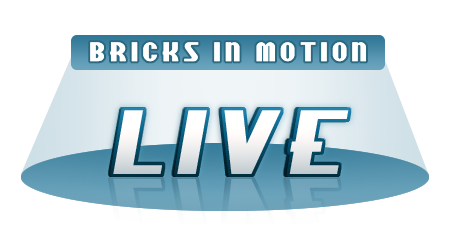 After the STAR deadline has passed, we'll be celebrating the end of the contest with the first Bricks In Motion Live ceremony.  All of the STAR entries will premiere consecutively, live on Bricks in Motion!

The STAR Premiere will begin on Sunday, July 26th, at 8 PM GMT - 12 hours after the contest deadline passes.  We will begin promptly, so don't be late!

STAR entrants are asked to wait until after the festival has ended to make their entries public.

How this will work

Shortly before the beginning of the STAR premiere, I will post a link in this forum to the new Bricks in Motion Live screening room.  For the time being the screening room will be integrated with a mibbit-based IRC chat for those who wish to join in the chat that will take place concurrently.  Video will be powered by Vimeo - if you can play Vimeo videos you should be able to watch the STAR premiere.

The focus of the STAR premiere will be just that - showcasing the STAR entries for the first time online.  Each qualifying film entered will be shown, and if the director is present this will be followed by a brief Q & A session.

However, there will be other extras and surprises - expect to see some sneak peaks at upcoming film projects by other directors on Bricks In Motion.

Additionally, the winner of the STAR Trailer Contest will be announced during the ceremony.

Sounds great, I can't wait for it!

I'm having my B-day Party on the 26th. Sounds really awesome, this is great birthday present. I'll definitely be there.

Damn, Im on summer camp that day. What do I do? Just sen it to the STAR account and then Smeabol will view it for me on the live show?

Basically just submit your video as you would anyway, with a private download link for me, and I can handle the rest, yeah.

Yeah that's 8 PM Greenwich Mean Time, so it should be reasonable for most of our users.  A little late for parts of Europe and quite early for Australia, but it was the best compromise we could arrange.

It's also in most people's summer holdiays so most people can stay up later than normal.

I seriously love this contest...

First there was only a contest, then there was also a semi-contest (for the trailers) and now this!!!!!
Smeagol, you're fantastic!

I'm a bonehead.. But not in making movies!

Thank god its on sunday

Wow that's a top idea and quite an exciting way to see the films for the first time.
I don't usually get up for work that early (6:00am) on a Monday morning but I think I'll make an exception in this case.
How long do you expect the STAR premiere will take?

I better go finish my entry then. I still have a lot of frames to edit in photoshop.

the only thing is, I wonder how many entries there are

And how long are they