In this, the pilot episode of The Nightly News at Nine, there is a massive prison break out caused by a soccer game gone horribly awry. One of the escaped convicts is Malifios, a villain intent on destroying New Block City. The NNN team learns more about Malifios's previous attempts to destroy the city as well as the New Block Citizens reaction to his threat to destroy their city. Meanwhile a war is mounting between the colors Green and Orange.

The initial concept for this series first came to me in Summer 2006. Script development began in Sprint 2007. I started filming in February 2009. I put in about 102 hours of animating and countless hours of building, recording, editing and so forth. Used a bunch of new techniques (for me) - masking, blue screening and lip syncing. I'm working on putting a DVD together and will let you all know when it's available for purchase. I'm excited to hear what everyone thinks!

I really enjoyed this film!  I subscribed.  Can't wait to see more of your films.

I think it's awesome, great animation, and you nailed the script.
Lovin the legshark

Hey everybody! The wait is over! You can now purchase Chapter 1: New Beginnings on DVD!! 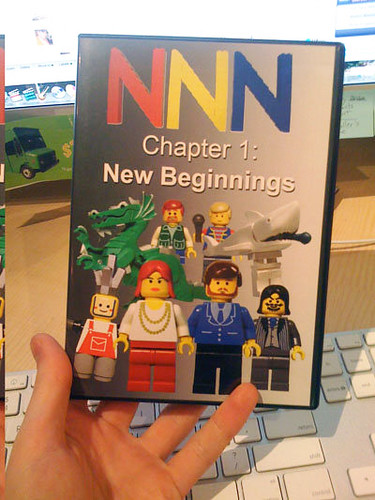 Go to the CreateSpace store and order a copy for $8 (+S&H). I will also be bringing copies to Brickworld in June and BrickCon in September, if you want to buy them in person and save on shipping. Woohoo! Tell your friends! For more details about the DVD contents check out the post on the main NNN website.

Next time I have some spare money, I'll definitely buy it.