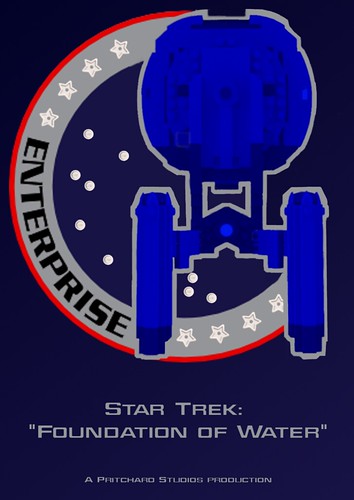 Synopsis:
Under the command of Captain Jonathan Archer, the NX-01 crew answers an urgent distress call only to quickly find themselves deep over their heads on a planet without any land mass.

As many of you know, I've been working on some CGI effects shots. I finished the script about a week ago and am ramping up actual production as we speak. It will be a stop-motion film, but with CG space scenes and effects. More information coming soon...

After years of avoiding Star Trek, I broke down a few summers ago and watched the Original Series films and quickly fell in love with the franchise. Now, as a Trekkie, brickfilms like this really interest me!

Looks stellar, Pritchard. If the CG tests and poster are any indication of quality, I'm sure the film will turn out brilliant. Love the plot synopsis too. Simplistic, but engaging. I can already think of a few great stories that could be generated from such an idea.

I'll be sure to follow this project closely! More Trek is always appreciated.

Looking forward to following the production of the film. The CGI tests you've put together so far look great.

I haven't watched much Star Trek, but I'm looking forward to this nonetheless. Good luck!

Very excited to see what you come up with mate! Do you have any ideas on how long the film will be?

Good to see all the interest!

Set building is going well, and contacting/collecting voice actors is next on the "major steps" list.

@Dyland, glad you like the synopsis! I was trying to find something that wouldn't give away any spoilers and was afraid it came out too generic and boring. Yep, more Trek is always great! I'm not sure why there are so few Lego Trek creations and brickfilms.

@Ozone, Don't worry about not knowing the background or crew well. I'm trying to make something that balances appealing to Trekkies as well as non-Trekkies that would simply enjoy a good sci-fi film.

@The_Director, Well...About that. A basic read-through of the script come up to ~18 minutes. Which isn't actually legal.* I made a few cuts, but it'll probably end up being two 7-9 minute parts. Which annoys me.

*Which reminds me that I need to erase "Star Trek" from the title...Ugh...

After spending nearly all my free time this weekend in Blender, I finally finished another shot and got the look of both alien ships, and one of their phaser beams, nailed down. Here's a tiny glimpse of one of the ships. (This one was built by a friend.) I'm super-proud of some cool things in the shot that aren't visible in this frame. I also learned a lot about Blender layers, materials, and how to make things appear and disappear. They might be elementary to some, but they feel like huge steps to me.

In other news, several of the voice actors are already lined up and I'm waiting to hear back from even more. 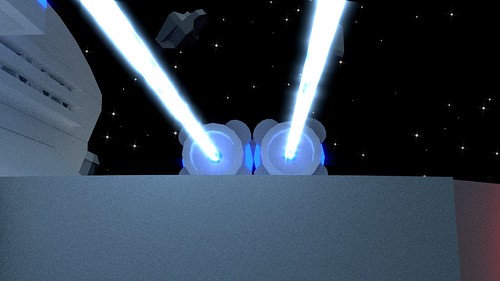 Ready for an update?
Ready for something a bit more physical and tangible?

Voice casting as slowed a bit, with several actors unresponsive. However, a few characters are cast and a couple even have all their lines in. I'm nearly done with another CG shot for the first scene of the film, character design is nearly complete, and the first physical set is almost done. 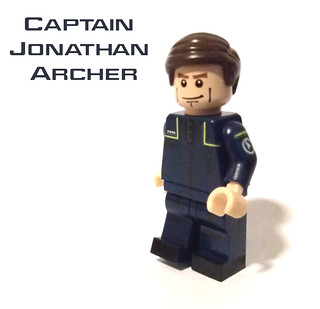 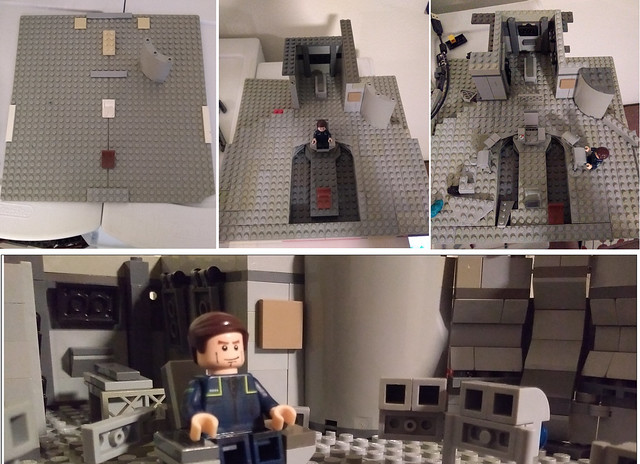 Do you need any female voice actors?

I do!
I sent you a PM with the details.

I just placed two Bricklink orders to get some parts I needed.
Among the more mundane elements,* they include the head and hair for T'Pol and a trans-clear baseplate for lighting the set from beneath.

In-set lighting has been rigged up for the Enterprise Bridge, and I'll try to get some test shots in the next day or two. On a similar note, designs for the Enterprise crew are almost complete. Of the aliens involved, a few are finished. As much as I'd like to use the Centaur body I got a while back from BrickForge, it simply wouldn't be practical to animate with. Guess I'll have to settle for something more traditional for that character.

I'm also nearly done with a CG shot of the NX-01 at warp.

As I said on Twitter, I got my own lines all recorded last night. While I'm on the subject, all but one role has been cast. If you'd like to try out for the final role, the (minor) part of Travis Mayweather, send me a PM.

Sorry if that doesn't sound like much, it's been a busy week.

What do you think of the bridge crew? I like the face/hair combos here, but if you have any suggestions,I'd love to hear them! I'm not sold on Hoshi's face, as the smile seems a bit big. Sadly, I don't have any other viable options for Travis. 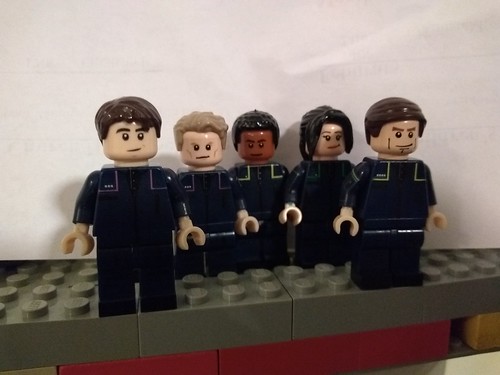 *And the many pieces I had no intention to buy before I started looking. Because that tends to happen a lot.

So, I've been banging my head against the wall regarding the CG for a while now. There's always some issue that comes up, takes up a ton of time, and then still doesn't look right. Thankfully, there are people like The_Director out there who swoop in and offer help.

He and I were working on a particular shot, we sent it to the render farm for rendering, and it came back kinda strange.
Cool? Absolutely. What we wanted? No way.
Turns out the particle system got seriously messed up.

So if you missed it in his topic, here is warp shot that got...um...warped.
The warped warp shot.
Enjoy!

Looks a bit like the ship is flying into a tunnel of sorts. What's weird is that the particle effect you were actually going for (I think) is visible in 1 or 2 frames.

Looks a bit like the ship is flying into a tunnel of sorts. What's weird is that the particle effect you were actually going for (I think) is visible in 1 or 2 frames.

Yep! When I sent it off to a render farm there was two guys who were taking FOREVER to render 2 frames, and it was the render farm causing the light bug so when I rendered the missing frames they came out correctly... so i kept them in.

Below is what it should have looked like. Dont worry! there are no spoilers here as Pritcherd is changing the camera and doing some additional tweaking on the lighting. 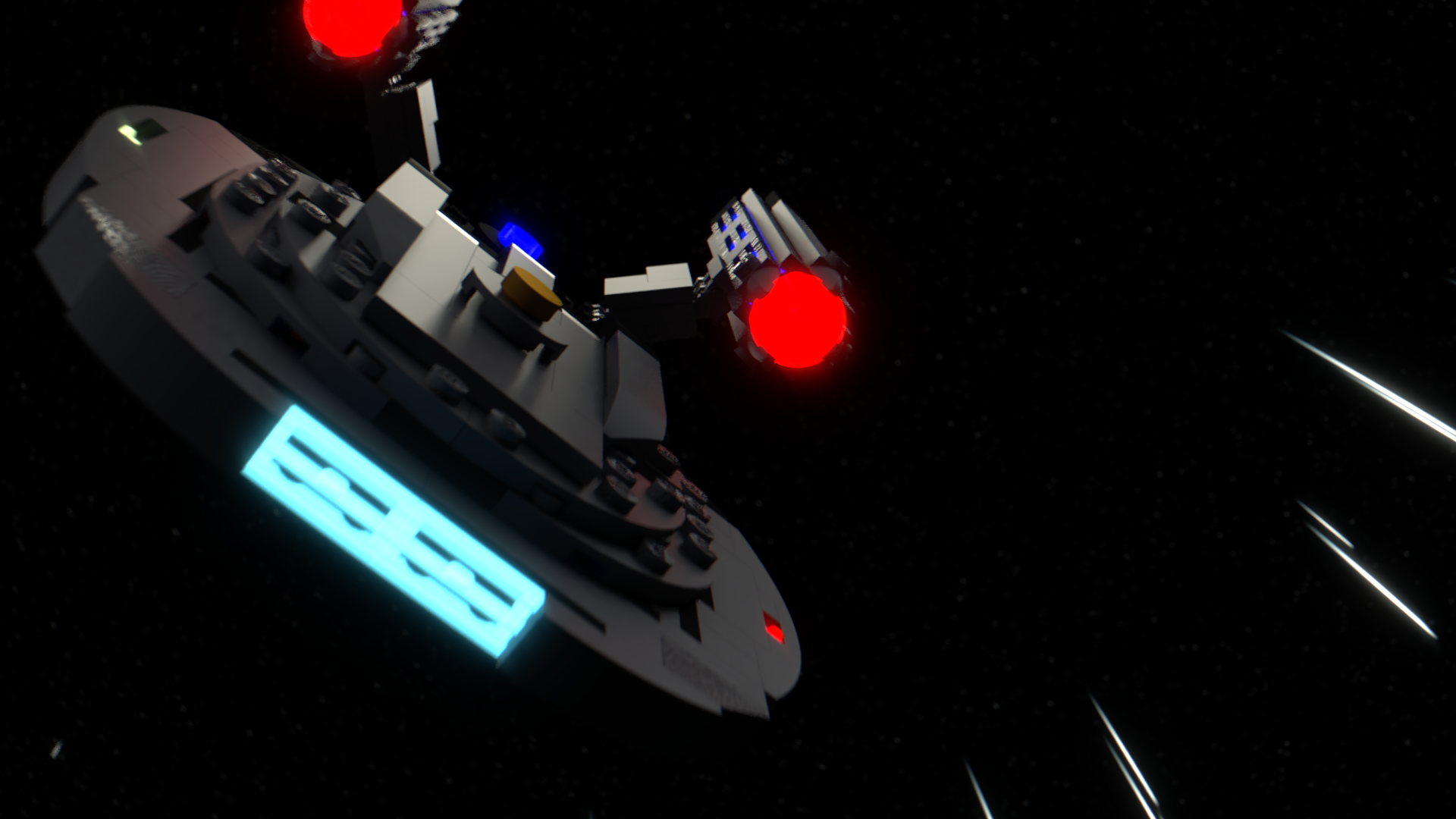 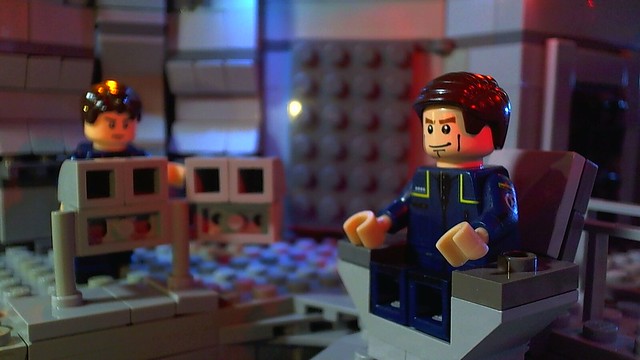 After months of pre-production and CG tests it's nice to get my hands back on some real-life Lego. Sadly, I'm far more rusty at animation than I had anticipated. Animation got smoother as things went along, but it'll be a challenge to get back to where I'd like it to be. While I was hoping to have most of the voices in by now, only a few actors have finished their lines. While that would be a problem for some, and certainly will be in later scenes, my normal practice has been to animate some to even all of the film before getting the lines in, so animating without them isn't a big deal.

I'm also having trouble with Boats Animator, but that's minor. Frankly, I'm just glad to be able to get something done. (I'm also thankful for my wife letting me take over the kitchen table to animate on!)

Ayway, any comments on the frame? I'd love to hear some feedback while I'm still using this set.

My one comment is that I think that's a really cool set.

Thanks BrickAnimator724! In the near future I plan on taking quite a few pictures of the set and how it is built so I can show it off on Eurobricks and Flickr. I'll be sure to let ya'll know when that is ready.

All but two voice actors have finished their lines and gotten them in. Listening to the lines has gotten me so very pumped up! Seriously, I can only hope the visuals will come close to equally the strength and talent of the voice cast.

On that note, I can't wait to share some of the audio with you. Which is why I'm plotting the main trailer and have already begun a teaser trailer for the film which should be out soon-ish. (I hope.)

Also, there is one last voice role available:
Travis Mayweather.
He only has two short lines:
"Thank you." (cheerful, but with a hint of confusion)
and
"Gladly sir!" (mostly relief, as this leads to a far less stressful situation)

If you would like to audition, please record the test lines, then send them to me via PM or email.
Thank you!

Hope you don't mind the quick double-post, but I got up early this morning and finished the teaser ahead of schedule.

UPDATE:
It's been a little while, wasn't it?
Progress has been steady, but slow. All the voice actors have been cast and all lines have been received.
Thanks to that, I've even begun editing Scene #1 just to see everything in action.

I'm about halfway finished filming the scenes on the bridge of Enterprise. After filming a few shots on a quick one-off set, it's off to planning the set design and animation on the other major starship interior.  I've even ordered some lighting gels to help set the mood and can't wait to try them out.

Sometimes, my sets are designed around a particular color or a building style, but for this next interior, it was all decided by the random discovery of a single piece. It's also in a color I don't use often, so it's exciting to make use of something more unique. (At least, in the world of my films.)

In honor of First Contact Day, here's a look at one of the main alien characters in the film.
His name is Devik. 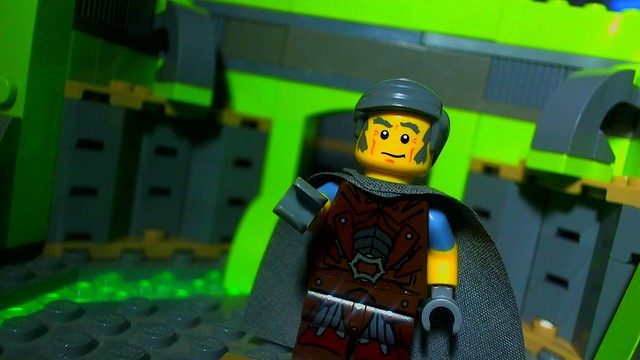 Also, that's a test for how well my clear baseplate idea panned out. It's not bad, but to get a decent glow requires pumping up the exposure and messing with the rest of the lighting. Still trying to figure that balance out, but it still looks awesome! 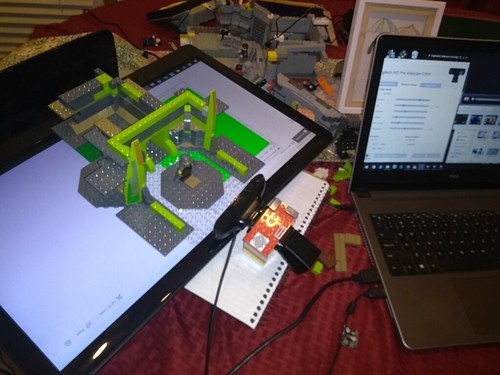