My laptop is so slow that it can't even render my simple stuff well. With that being the case, I doubt it'll be worth trying to "sheep" it, as it probably can't handle anybody else's renders either.
Good idea though!

I'm trying to render the thing, but it seems each time I try it, it gets even slower. While at work today (8:00am-5:00pm) it rendered a whopping ten frames. I'm letting it go, then stopping it when I need to do other stuff on it, then setting the "start frame" at whatever it finished at last time. I've gotten nearly 60 frames that way, but there's still a long way to go. Not sure what I did to make it so slow, but whatever it is, it's getting on my nerves!

Sheep it lets you use other peoples PC’s gpu’s. Much more power!

If you send me screenshots of your render settings, and a few shots of the scene itself I might be able to help.

I have my own render farm collecting dust at the moment.  If you need to do an NDA with me, I can render it for you.

Sheepit is a good free collective of people around the world who understand the processing demand Blender has so they all likely share their beast (not a typo) computer's processing power.

Ok, so I'm checking out Sheepit right now. Just started, so I haven't rendered enough to be able to submit my own project just yet.

Lech, I'm not sure what NDA stands for in this context (National Dental Association?

) but I do really appreciate the offer to render it! I'm not happy with the lighting just now, but once I get that fine-tuned, I may get back to you.

Here's another frame testing the look of the stars. I reduced the size, but the random placement just doesn't seem, shall we say, natural. This angle doesn't show it, but I'm not liking the way the light grey blows out really easily. Hoping to get that fixed soon. 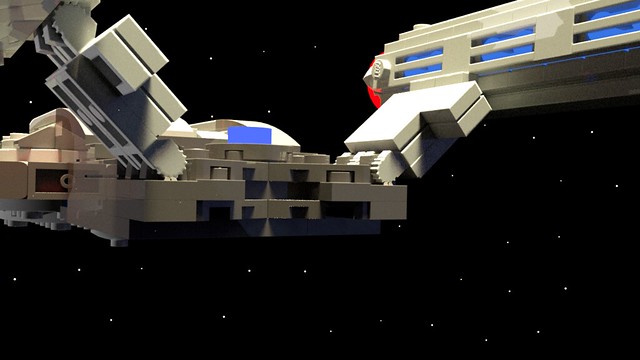 By signing a NDA your legally bound to not reveal any information within the bounds of the agreement.

It’s often used for video game alpha’s, where the game is not yet complete and the developers don’t want you to reveal its secrets. Technically I am bound by 2 NDA’s right now. I cannot even say which video games they are for, or even if they are video games.

Again if you want help rendering, or for me to fiddle with the settings for you just let me know.

@lech, if you want to boot up sheep it on your farm and generate points now, that can help me by donating the points gained to me when I have a project ready to be rendered.

Basically, I won't share what you're making with anyone other than with you.  If you need me to sign an NDA, we can do that.

Director: It's been a while since I've booted up the farm.  Been meaning to upgrade the GPU and add more battery backups.  Might start warming it up for the winter.  On my shopping list

So, like I said, I fired up Sheepit last night, rendered my requisite ten frames, then left it running all night after submitting my project. The end result was the render taking two hours and my raking up a surplus of nearly 7,500 points. To say I'm impressed and happy is an understatement.

Yep! Sheep it is the best. Just remember to keep your points in the green or else you will be bumped to the bottom of the queue. (I am negative 300,000 points myself lol)

Been playing around so more with it, here's the latest:
Star and Warp Test

The "final" test isn't quite final. There's that weird issue at the end where it flipped from the final frame of the sequence to the still frame that I didn't notice while rendering,  and the angle of the ship doesn't quit match the warp flash.

Still, I'm pleased on how far it's come.

If your interested you can add a layer with an emission layer on the engines, add a huge amount of blur motion, overlap that with your final render & show a engine trail.

Looking great, Pritchard! The movement is really dynamic. Any way to add a deformer to stretch the ship out front to back when it goes into warp, I think that would really sell it!

After a very nice stretch of Discord, I present to you:

Also Ive recorded me saying words. it will be powerful and well... not worded well. But i just might help too.

It was done in 1 take, so sorry for doing some backtracking.

Once again, thanks for the great advice and aid! It's only thanks to articles, tutorials, and folks like you that it's come this far already.

The render looks very nice, though I'm not sure why you blurred out the last few seconds. Was that just a side effect of the depth of field, or an intentional effect?

Your speaking video had a lot to take in and take care off, but it's all nice and clear and very helpful. I know what I'll be working on later this week!

Again, thank you for the help, and I hope you have a Merry Christmas!

If I may make a suggestion, the animation of the asteroids starting and the ship ending were a bit weird. I know what this is, I had the same problem a lot back in the day. Blender applies an automatic easing thing to its animation curves to smooth it out. I'd say either continue the motion after the shot ends and cut it short in editing so it doesn't ease out and just stop (or start from 0 and slowly ease in in the case of the asteroids) but change the curve type to Vector for motions which are supposed to be continuous instead of have easing (in this case, there wouldn't be easing on the asteroids or ships because presumably they were moving before the shot started).

To do this, find the keyframes in the dope sheet, press T and select Linear (or V and press Vector).

@Pritcherd the blur was just something I cranked to 11 (well 20 but who’s counting) it’s your project so I don’t mind how the end result comes.

@rio I agree, these asteroids have been in orbit for thousands of years, best to remove any ease at all and have a linear curve (straight diagonal lines) on all axes.

Thanks for all the tips!
Also, a very special thanks to The_Director for the very informative chat sessions.

Thanks for all the tips!
Also, a very special thanks to The_Director for the very informative chat sessions.