My “found” collection of Oven-Themed brickfilms!

It wasn’t that long ago that I started brickfilming, and to learn more and get better I started watching as many brickfilms as I could. I stumbled across jwkublick’s “The Painter” not to be confused with Mirko Horstmann’s “The Artist” (both are worth watching) and I plunged my spoon-of-interest into the rest of jwkublick’s brickfilmography, and I found "The Oven Tragedy". Short, humorously absurd in concept and delivery, it has a nice build from uncertainty of the main character’s sanity, to multiple twists of revelation and its final twist ending. There’s even an alternate ending after the credits! I was thoroughly entertained and every time I watch it, it makes me smile.

Not too long after that finding I discovered “The Oven” by Smeagol. “The Oven” is a witty play off of Edgar Allen Poe’s  poem “The Raven” and is well-versed in its script. What I especially liked is its ability to create a sense of being on edge. Edgar Allen Poe tended toward macabre tales, and this story with its stone-cold narration gives the viewer a chill throughout the story that something could, no WILL happen. And it does.

With two Oven-Themed Brickfilms found and liked on youtube, I felt the desire to make a playlist of Oven-Themed brickfilms. But for me, two is not a collection, it is a pairing. So I went on without much fuss. Then, suddenly, THAC XIII crept up and pounced.

The title is less dramatic and more pragmatic than you’d think just from reading it. It starts with a bang and ends solemnly. Seriously, if you want to animate an abruptly brutal explosion, take notes from this one. It’s also an excellent example of sound design throughout the film. For a THAC entry it is well done. AnimationIsaac struts his stuff in a few other videos too, you should check him out.

All in all, I’m quite pleased with this three-course potluck. But there’s always room for more… how about it? Care to turn up the heat by making your own Oven-Themed brickfilm? Or do you need to get out of the kitchen? 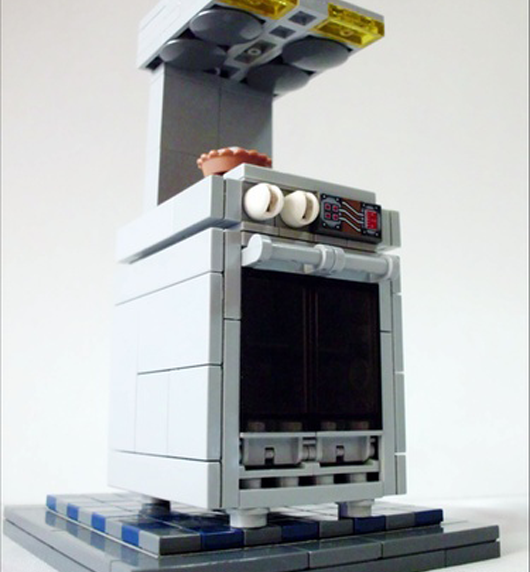 The last film has to be my favorite, I really like the opening  shot and the oven explosion was really well made.
On another note, the title itself is very creative, it makes you wonder what kind of disasters could be caused by an oven.:)

An interesting theme for this week! I have only come across the last one before (which was shortly before THAC XIV when I was looking at past entires to see how good they were), however I did also find the other two quite enjoyable.

Do you love brickfilm or stopmotion, Petromax, Star Wars or Lego?

If your answer is yes, you have to watch:
Rocket Stove Wars.

That's pretty good. I don't know if it necessarily qualifies as Oven-Themed, but the set is made from an oven, which is certainly unique!

Never really cared for Oven Explosion Causes Death and Destruction, but Smeagol's The Oven is one of my all-time favorite brickfilms.

As a side note, I love just how quirky the theme of this Brickfilm feature is.

Can't wait for the one centered on handshakes.

That is odd, i was just thinking of Smeagol's "The Oven" earlier today. What a nice coincidence.