Absolutely love what you've done with the coat of arms. Very novel use of croissants.

Thank you Jampot, but I actually stole the idea from TOWN HALL modular set (10224).

Once in a while I actually have an original building idea, re-appropriating a piece meant as another piece.  The banana is a curl in Laura Cameron's hair (the blonde) in my Lego Pan Am.  These are my first, amateurish, figures using Cube Dude heads, so excuse Kate Cameron's (the redhead's) hair, which really needs more work. The first episode of my ongoing MBU series The Defenders is on track for a December 1st release; just finalising the edit and waiting on a couple of collaborators. The series is nothing groundbreaking but I hope you'll enjoy it nonetheless. Here are a few preview frames. Please excuse the quality issues, I uploaded these to Facebook.

That last one is from a vision/dream sequence. It won't look as hideous in context, trust me

I am actually quite excited to watch these now. Fantastic shots.

A little something I'm working on.

Jampot, In the last frame, you accomplished something quite hard to do in LEGO form. Make something truly terrifying...

Lechnology, is that frame from LDD? If so, are the new TFA set prints on torsos now? Haven't updated in awhile.

No. FYI, LDD should never be used for animation.  Modelling, yes, not animating.  The prints (or decals) and even BB-8 were recreated off of high res images I found online.  If they do exist, I'm not aware of it.  I usually recreate rather than copy, if possible.

(off topicish) how does one get CGI model from LDD to a 3ds or something, never seemed to work for me...

Option 1: Ldraw and Blender with Ldraw import script.  Ldraw's dat file of the LDD piece has to exist or it won't import.
Option 2: 3DVIA Printscreen, a 3dxml converter, and Blender.  3DVIA will do a 3D screenshot of what you have on screen (like your LDD model) and creates a 3dxml file.  You won't find any new information about converting 3dxml to 3ds since 2010, but I did find a 3dxml to Dat converter on the Ldraw forum, meaning you'll need the ldraw import script since it imports dat files.  Once imported, you'll see it imports your model as a single mesh.  Hence it is ideal to just place the pieces you need in LDD and build your model in Blender or whatever program you use after you export from Blender.

Warming up for THAC with a little Star Wars short. Been a while since I did one, and seeing Episode VII was the motivation I needed to actually get something filmed. The effects will keep in tied-up in post-production for a while, but here's a little taste of what is to (eventually) come.

I'm pretty happy with the framing in this shot, but for collecting Lego for over 16 years, I was surprised to find that I only own three Stormtroopers. In fact, I have nearly twice as many Scout Troopers...Odd, but true. 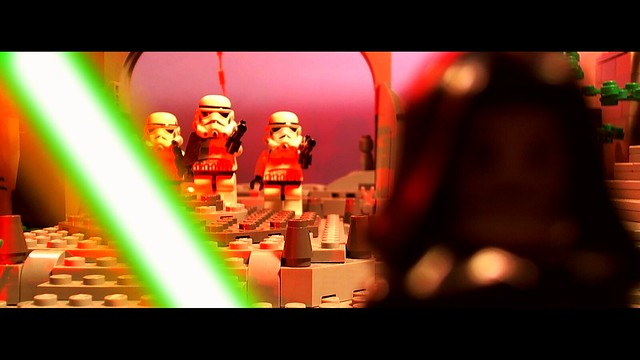 Cool frame, I really like the framing and the colored lighting; gives an other worldly feel to it.

I've also been warming up for THAC by making a short. Inspired by Darkness and Light I decided to make a film noir spoof, since I need to work on lighting and cinematography anyway. 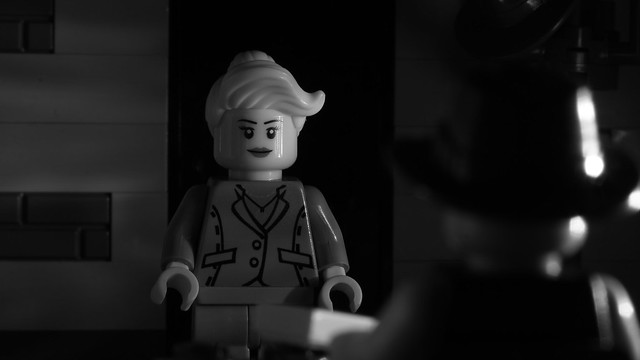 You've done a great job lighting the gal's face, but still keeping some nice shadow work. I like the hat rack, but it's a shame we can't see it too well.

Were I to critique your framing, there seems to be a bit of empty space on the left, and the girl is close to center frame, but still off just enough to bug me. Perhaps throwing her off to the left side, and keeping him on the right would create a better balance. Are you thinking of using grayscale in your THAC entry? It would certainly set it apart, though you'd have to give up on the color mod.

Pritchard, as was said, the framing and lighting is really nice. However, I can't shake the feeling that the frame is overexposed. I think it's caused by the harsh red light on the front of the stormtroopers, increased by the harsh white light above them...the end result is that they are kinda washed out, making the entire frame seem overexposed.

Backyard, I would agree with Pritchard about the framing being off. You could fill in the left with something, or change the girl's position/camera perspective. I really like the back lighting, and the rim light on the man.

Thanks guys. No, I'm not going to use black and white for THAC, using the letter mod in every shot would be way to hard.

Here's a frame from my next film, Lego App Man!

This thread has been closed to make way for a new thread, with new rules. William you may repost your image there since you weren't able to get any response here, if you like.