Time travel can get pretty awkward at times.

Well done. What did you do for the tracking shot moving toward the bride and groom? I noticed a tiny bump on that, but it was quite smooth.

This is your best film.
I'm glad to have been a part of it.

The lighting was really fantastic, and I really loved the sets.
Though, the really stylish windows that the German bloke had looked kinda like it was supposed to be futuristic, along with a few other things. I feel as if you should have placed it in something like 2042 or somewhere around there.

You did a very good job on the facial animation of the Doctor, but I feel that the placing of the mouth felt off.
The blink itself looked rather cheesy, though. I would have just smudged each frame individually.

For the light flickering, I think it would have been cool if you had a window or something not effected by the flicker so that there still would be a tiny bit of light left and thus make the flicker more realistic looking. It basically looked more like quick fading to black.

For the church at the end, I wish you had made it so that there was more light behind the window than in front of it, just because well-lit stained glass windows in a brickfilm look REALLY REALLY cool.

These are really minor complaints though, I still loved the film and I added it to my favourites list.

I think that The Doctor's last two words would be good advice for any and all competition: "Good luck."
Because without it, they have no hope.

Maybe I'm just biased because you're one of my favorite animators, or maybe it's because Doctor Who is my favorite TV show of all time, but I think that this is will be the winner of the animation challenge...Hands down. And yes, that ending would be very awkward. As with ANP, I felt like the 2007 scenes were more futuristic than that, but they are still great. The sets overall were detailed, and yet somehow still simple. (In a good way.)

I don't care for mouth animation with teeth, it just doesn't seem right to me, but it was done well. Next time though, you should bring the eyes and eyebrows up a tiny bit, and then shift the whole face add-on over to the right. It doesn't need much, but it's noticeably off-balance. The angel custom was good, but you forgot that they get all snarl-y and evil looking when they attack. And if I could be nit-picky, I'd say that it may have been better to have another freeze point before it gets him.

Now for the blink, the left eye was fine, but there's a noticeable square on the right side of his face where you covered up the eye. It would have been better to cover it up more seamlessly frame-by-frame in Photoshop. Really though, the eye-square is the only big-ish issue in the whole short. You did a great job, and you should be proud. The lighting, the sets, the cinematography and the animation were all fantastic.

The angel custom was good, but you forgot that they get all snarl-y and evil looking when they attack.

Perhaps this could have been remedied by either
1: using a snarly looking face of a different colour, then draining it to grey on Photoshop
or 2: Revers the face to leave it blank, then crate a carefully made custom face in post.
(Since that point is totally still, it's would work a lot better than that sort of thing usually does)

How does he go from being attacked to time traveling to England?

How does he go from being attacked to time traveling to England?

The Weeping Angels feed off of potential energy.
They zap you into the past then feed off of the life you would've had.

Thanks all! And thanks to ANP and Pritchard for those long and in-depth comments as well, I really appreciate those. I admit that the "blink" was pretty lacking... I knew it, but it was one of the last "vfx" parts that I did and I was getting really tired of working on this video.

As far as the final angel's face goes, I had thought that making my own custom face for that shot would be a lot better, but I didn't really have the time to devote to that. I was pushing it as it is getting the video done and with school starting back I let that part slide. Glad that you both really enjoyed the video as Doctor Who fans. I haven't watched a lot of Doctor Who, but this episode is definitely my favorite I think.

I've got quite a bit of behind-the-scenes content for this video that will hopefully be coming in a week or so. As some of you know, the angel scene and everything but the wedding was completely re-done and changed from what I originally animated. This video started out as a just-for-kicks kind of thing but quickly escalated into something more. I may post the original, but terrible, animation I did for the beginning just as a reference as to how much it changed and improved when I re-did it.

Wait, so the guy turned around and blinked. But, how did he get to the wedding?

Wait, so the guy turned around and blinked. But, how did he get to the wedding?

Here's a link to a video explaining.

When the angel is not being seen, it can move, when you look at it, it's stone.
That guy blinked, when he blinked, the angel could move again and touched him.
When an angel touches someone, they are zapped into the past so that the angel can feed off of potential energy.

It's kinda hard stuff to understand unless you're a fan of Doctor Who.

Nice!  I agree about the "square" blink, but aside from that it was great.  I liked the dark and spooky beginning, and how it contrasts with the light church as well as the design of the sets.  The only thing I don't really get is how the guy went from beiong in Germany to England.  Overall, good job!

Thanks! Nice point about the contrasting sets, though it wasn't necessarily overtly intentional. I was trying to go for both of those appearances though. If you want to know what happened, check out Squid's post about yours. I'll post the behind the scenes link to this thread probably when I have it all compiled and online by the way.

If you want to know what happened, check out Squid's post about yours.

I guess it's unknown why, unless it is mentioned in a later episode. But the times that it happens in the show, a location change always takes place as well.

All of the angel's victims move location to one extent or the other.  Some just move farther than others.

They could move people through both space and time, as Kathy was touched in London, but ended up in Hull in 1920; Billy Shipton was touched inside a parking garage and arrived in 1969 in an outdoor location.

Next time you use facial animation, I think it would look better if you had the mouth be completely black. No teeth or anything. It looks more LEGO that way.

Next time you use facial animation, I think it would look better if you had the mouth be completely black. No teeth or anything. It looks more LEGO that way.

LEGO minifigures have teeth. I think the faces however do need some tweaking to look a bit more LEGO like, but that is a person opinion. I just like things to look as LEGO like as possible.

Hey guys, I finally released Behind-the-Scenes content for this video over on my website! Check out the original scene I filmed for this video, production stills, and lots of commentary. 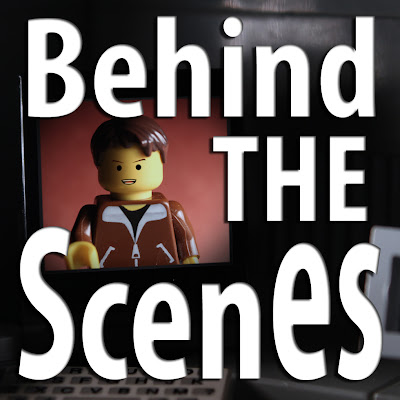 Thanks Spider!
Your BTS stuff is always great, and this was no exception.
The lighting tips are something that I'll probably be using soon, and it was cool to see Weeping Angel scene Take #1.