Ever since LEGO began releasing minifigure scale Minecraft sets in 2014, I’ve been a big fan. Beyond the fact that Minecraft is my favorite video game, I’ve always loved these sets for their energetic aesthetic and their focus on simple plates and bricks. When I was graciously given the opportunity to receive a set from the LEGO Ambassador Network, something from the Minecraft range was an easy choice. 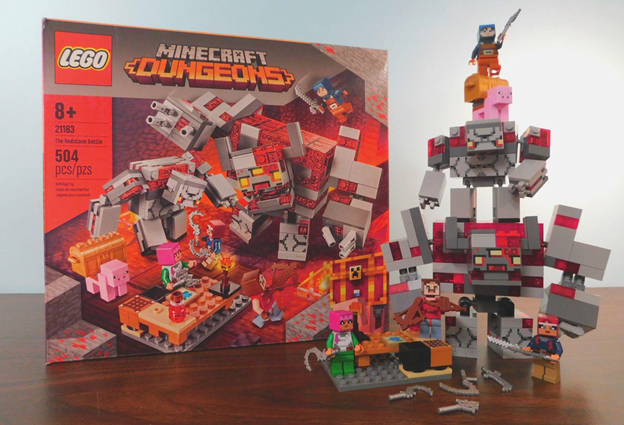 “The Redstone Battle” has 504 pieces and is based off the Minecraft spin-off, Minecraft Dungeons. The set comes with a four-minifigure-and-one-pig dungeon party, ready to journey into the depths for whatever bizarre adventure awaits. Each of the minifigures have entirely exclusive prints for their torsos and heads, giving them a lot of personality and very well suiting them to fill out a brickfilm’s cast. It’s quite nice to see LEGO continuing the trend of diversifying the minifigure selection of Minecraft sets away from your average Alex and Steve – I especially like the mustache sported by the fine fellow in the center. 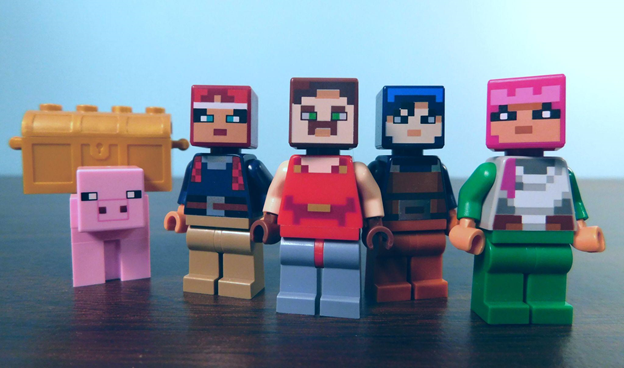 The dungeoneers are provided with a fine assortment of weapons with which to battle the Redstone Monstrosity, as well as a small staging area to prepare for their missions. Within this staging area, we’re given a crafting table, a cauldron, a map, a health potion, and, finally, a lone torch. The amount of tools and accessories this set provides really do make it an ideal Minecraft starter pack, and I’m happy to see these adventurers are well outfitted for the journey ahead of them. 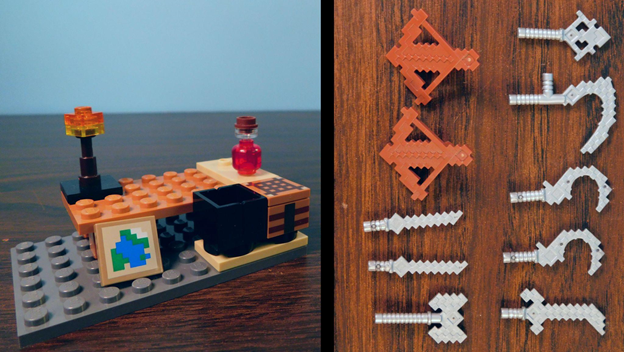 The vast majority of the set is dedicated to the Redstone Monstrosity and smaller, less intimidating Redstone Golem. Both feature several points of articulation, but unfortunately are still pretty limited in pose potential. For a toy, they’re pretty great, but for animation, they’re a little lacking. 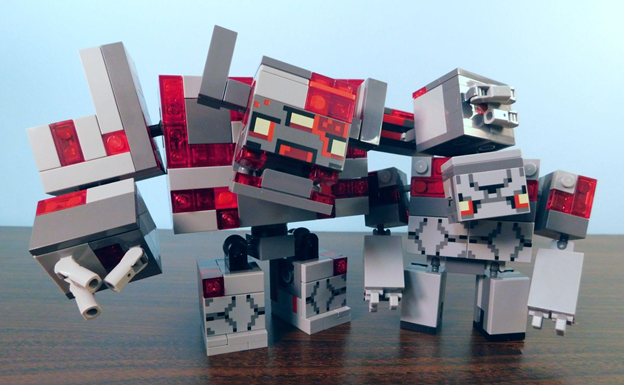 The Redstone Monstrosity especially suffers here, though one could make an argument that more posability would detract from its lumbering, brutish form. Both its arms and legs use classic ball joints, which provide plenty of support and allow poses to be held reliably. Its elbows use racket hinges, which significantly limit range of motion, but also hold their positions well. Unfortunately, the spikes on the Monstrosity’s shoulders prevent the arms from turning very far from the body. Its legs are even more problematic – Their short height and center-based point of connection leads to any attempt at walking appearing more like a waddle. On a more positive note, I absolutely love its head! The gaping jaw has so much personality and it’s easy to imagine a horrific roar coming from within. 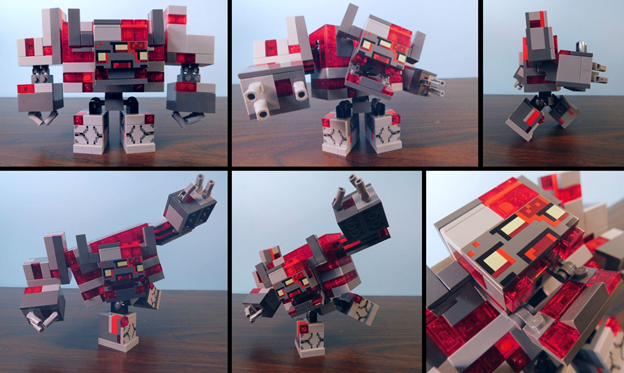 The Redstone Golem is significantly simpler to work with. All the connections use Mixel joints, even the head, allowing for a huge range of motion and some surprisingly dynamic poses. The legs attach in a much more typical manner, making walking more natural. And also, it’s tiny fingers can kinda-sorta hold accessories, which I find very cute. The simpler posablity and general charm of the Golem is the reason I chose it to be the focus of my upcoming brickfilm, aptly titled, well…. “THE GOLEM.” The film was originally intended to be released alongside this article but, unfortunately, lies as of yet unfinished. Keep an eye out though, as I hope to complete production sometime in the next couple months.

Overall, I really love this set! As I mentioned earlier, it’s a wonderful starter pack for anyone wanting to get into LEGO Minecraft or create some sort of Minecraft based brickfilm. The minifigure line up is exceptional, and the large figures are well designed and fun to mess around with, despite some flaws which make them a bit rough to animate with. The Redstone Battle is available on LEGO.com and wherever LEGO sets are sold.

Super hyped for your film! The mustache man is sublime, and it’s a great set. RLG studios also did a fantastic test for this set. Nice review!

God bless and brickfilm on!