--------
This review and brickfilm were generously written and created by Gold Brick Productions. Check out his other brickfilms here, and be sure to subscribe: https://www.youtube.com/channel/UCyoUsO … YdxbEHsKBw
--------

Yes, placing every single one of those small white and tan tiles was absolutely worth it.

I’ve never animated with a LEGO Architecture set before, much less such a massive one, so when Bricks in Motion asked me to take a look at 21056 Taj Mahal and make a brickfilm with it, I took this as a challenge. Granted, animating this set itself would be difficult, as it is a static location that, by design, doesn’t move. It did not take long, fortunately, to realize that a film located at the famous monument was the most logical option. 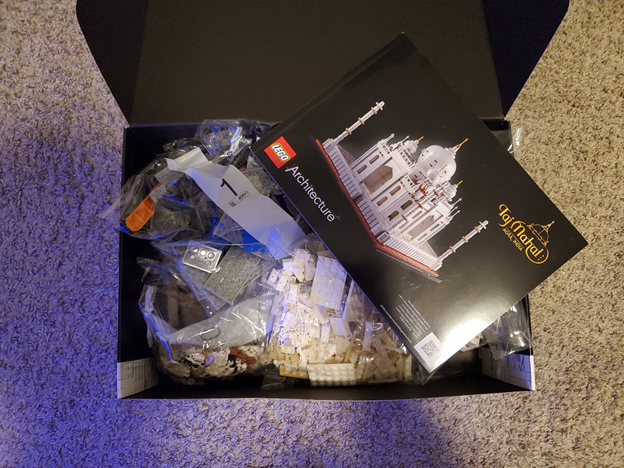 Before I could animate, I spent a few hours building the set – all 2,022 pieces. It’s an enjoyable build with a variety of great pieces that could, if a brickfilmer wanted, be repurposed for other animations. There’s plenty of white ingot pieces that provide the base with unique texture, tons of ski poles for minifig use, candlestick pieces for ominous plastic rituals … 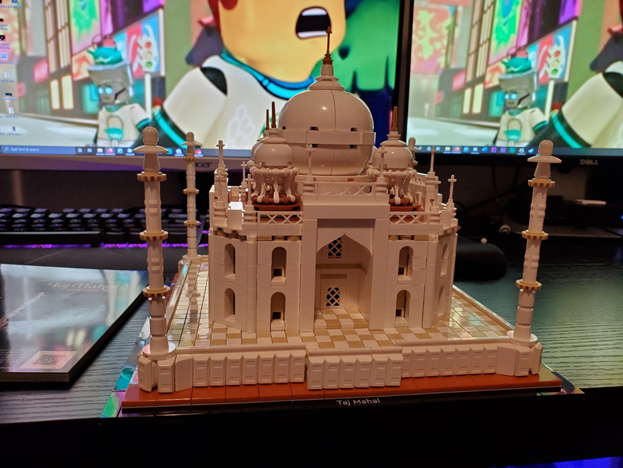 When the build is finished, the result is impressive – a good display piece for a home or office. The domes, columns, archways, and the tile floor stand out most distinctly, demonstrating some creative piece usage and attention to detail. It’s been pointed out by some that the columns are not exactly to scale with the rest of the model, but at least the distinct shapes make the model easily identifiable. Granted, if you forget the name, there’s a conveniently-placed 1x8 tile in front that should help.

Really, the only obstacle to using this set as a convincing backdrop for a brickfilm is the black border, which works perfectly for a display but can make it difficult to convince the audience that the set is a part of the film’s world. I resolved this issue by building my set over the border and around the actual structure, adding a pool and trees to mimic the actual monument. Since most of this was blocked by the balcony with my characters, intricate detailing was not really necessary. 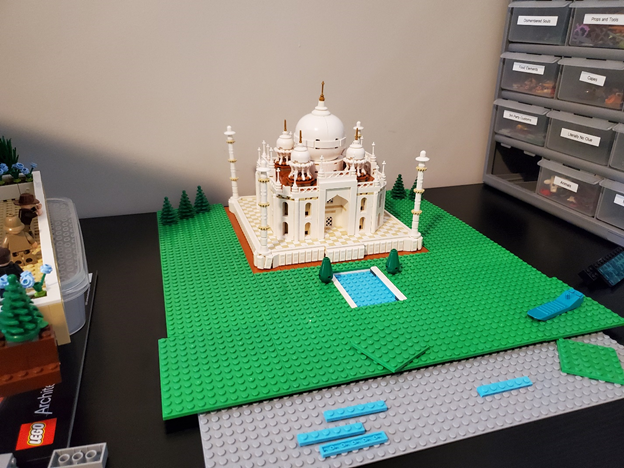 (Pay no attention to the repurposed white ingots I stole from the back of the set to make the pool, don’t worry about it.)

The minifigure-scale characters presented another challenge as the set is a different scale altogether. I rectified this by placing the Taj Mahal far away enough from the minifigures to give the illusion of a far-off location, so its relatively small size would simply look like a far-away building. Microscale backdrops are not a new concept to brickfilming, but for the sake of giving a good technique the credit due, this Taj Mahal gets the job done quite nicely.

Considering that the Taj Mahal is a famous mausoleum and historical monument, it made sense to create an adventure-style film around this backdrop – and since I had just watched the Indiana Jones movies recently while rebuilding the old minifigures, a parody felt logical. I have a sort of nostalgia for these old sets, but while I had character interactions and a few visual gags all ready to go, the focus needed to remain on the Taj Mahal itself. Thus, I made sure the plot could keep returning to the monument in the dialogue and in several of the shots of the set itself. There were some ideas to add some easter eggs based on the old LEGO Indiana Jones: The Original Adventures game (anyone remember those parcel hunts?) but they felt out-of-place. The Taj Mahal was the star, and for the first time in his cinematic lifetime, Indy had to take second place.

The bottom-line question for these sorts of reviews is pretty straightforward: would I recommend this set? For a brickfilmer who wants a great-looking Taj Mahal set in their Taj-Mahal-centric film – absolutely! More generally, however, the price tag is a bit steep for most brickfilmers seeking a background prop, so I be more inclined to recommend this set to Architecture fans or those who have visited and admire the Taj Mahal’s architecture. The parts selection is quite vast, so if for some reason you need to borrow some of those glorious white ingots for another film, the option is available.

I’d dare argue that my assessment of 21056 Taj Mahal is par for the course with most Architecture sets – their usage is limited in terms of creating brickfilms, but when used well to really sell the audience on a specific location, they do have merit.

Now, a part of me does wish I had the time to turn Indy and Belloq’s standoff in a more interesting direction, but while that idea may never see the light of day, at least you can enjoy this nonsensical concept shot of my set … 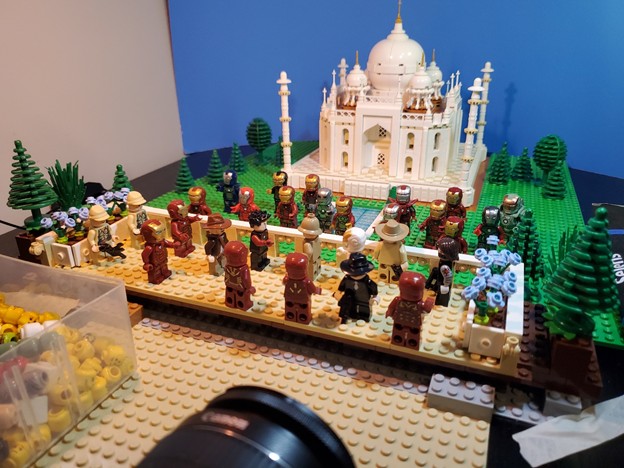 This set was generously provided by the LEGO Ambassador Network for review. LEGO Architecture 21056 Taj Mahal is available now. https://www.lego.com/en-us/product/taj-mahal-21056

Lego really does seem hell bent on sending over the least obvious sets for brickfilming for these reviews! That certainly keeps it nice and interesting though, leading to a whole load of pretty imaginative uses of non-traditional sets.

Banger of an article [email protected]
Will be sure to purchase for all the needs of my deceased Indian 1 percent royalt6n;)

Lego really does seem hell bent on sending over the least obvious sets for brickfilming for these reviews!

They need qualified people to rise to the challenge, hence, us

Will be sure to purchase for all the needs of my deceased Indian 1 percent royalt6n;)

A great BricksInMotion review as always, along with a fantastic film. The set's been hyped up for a while, and it doesn't really disappoint. It's obviously on a smaller scale than the original record breaker, but it makes up for it with great building technique, and a diverse selection of killer parts. The set itself looks pretty solid. It's nice and clean, as well as being instantly recognizable. The turrets and domes have a really cool shape to them, and really, the whole model has the same sort of majestic feel to it, and makes it stand out from some of the other Architechture sets. One of the only things I disagree about is that I feel like it could have several other uses in terms of brickfilming than just a background. For instance, put a minifig on it and you've got a giant attacking, or put the set on a green plate and make a few additions, and it could be a monument course for minigolf, or you could have a brickfilm where the Taj Mahal lifts off in a grand heist! These aren't necessarily the best ideas, but I'm just trying to point out that I don't think it's brickfilming uses are limited to a background. Like all Architecture sets, the box design is super cool and attractive, as well as the instructions. Also, I'm totally salvilating over those white ingots. A couple of the uses that spring to mind are a gravestone, a Hershey's white chocolate bar, and a currency where in the future marble is the most precious commodity (maybe that's why someody steals the Taj Mahal?). There's also a bunch of other rare and desirable pieces in that set, so it can just be a good resource for other builds. It seems like a pretty fun set, but the price tage is a little steep, so I'm not sure if it's worth it for a brickfilmer. One last thing about the concept shot: yes. Just yes, what a great idea. Iron Man didn't die, he just went to the Taj Mahal!!!

As regards the brickfilm itself, GBP delivers such a stellar film. It's a shame that there weren't any game references, but it makes sense that it would just make the film be all over the place. But the brickfilm is really so much fun to watch, and the baclony is a great build as well. Gold Brick Productions fully exploits Belloq's really lame smug head, as well as Indiana Jone's grimace. Also, even though it was expected, the twist was hilarious anyway, and that Han Solo in the background was sublime

. Another detail I liked a lot was that even though it would have been fine, Gold Brick Productions took an extra step and didn't just have the Taj Mahal as a background, but had several shots focusing on it, showcasing some of the details of the set in the video itself, making the Taj Mahal more central. As I commented, Locker74 Productions does a great PO'd Indiana Jones, and Gold Brick Productions also has a very distinctive voice, so it was super cool watching those two voices face off as Indiana and Belloq. A great film, a great review, and a great set!