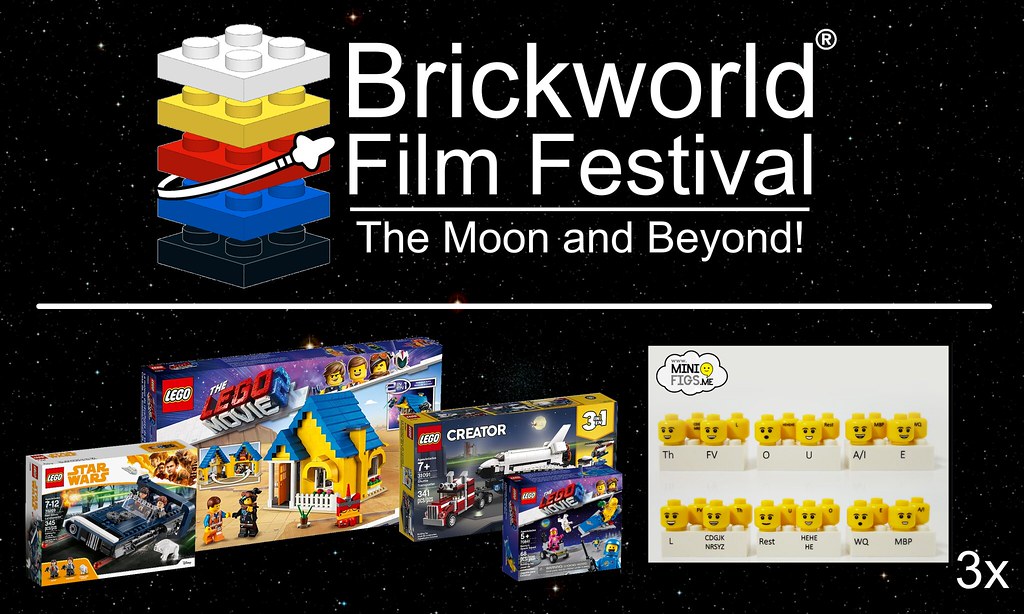 The event theme for Brickworld Chicago 2019 is “The Moon and Beyond” – we’re excited to see how directors will send our expectations into outer space! Contestants will be eligible to win 1st, 2nd, and 3rd place prizes, in addition to an attendee only prize (for a $240 USD pool)! We are once again proudly sponsored by minifigs.me and are excited to get more phonetic heads out to brickfilmers!

While attending Brickworld Chicago isn’t required to enter the contest, we highly recommend it. In addition to the film festival, we will be running a LEGO animation workshop, screening a special film, showcasing models from our latest animations, and generally hanging out and talking about LEGO.

Official Rules
1.    Your film should use LEGO elements to tell a story. It can be animated or live action, or a combination of the two.
2.    Your film must be longer than 30 seconds and shorter than 5 minutes in length.
3.    Your film must not have been submitted to any previous Brickworld Film Festival.
4.    Your film does not have to include the theme “The Moon and Beyond”, but it is highly encouraged.
5.    Anyone can enter a film in the festival, but you must be a Full Registrant of Brickworld Chicago to be eligible for the “Best Attendee Film” award and prize.
6.    Films should be enjoyable by all ages. Film content such as (but not limited to) curse words/swearing, excessive violence, sexual content, and drug use will be grounds for disqualification.
7.    By entering your film for consideration, you attest that you hold all rights to exhibit the given work. This includes (but is not limited to) visuals, music, and characters. Unlicensed use of copyrighted material is not allowed.
8.    By submitting your film, the Brickworld Film Festival is granted the right to use and/or publish clips or the full videos, screenshots, director and crew names, and any other material related to an entry in the event program, the Brickworld Film Festival screening, the Brickworld website, re-screenings at future Brickworld events, and for any and all promotional purposes.
9.    Limit one (1) entry per director.

If you have any questions, please e-mail [email protected] We look forward to seeing your films!

Brickworld Chicago 2019 is 2 weeks away and the deadline for the films is less than that! We'd love to get your entry! Let us know at [email protected] if you have any problems with the submission form.

Sorry for the delay in getting out the results. The winners in the international category of the competition were:
1st place: “French Wines” - by studiosepsilon
2nd place: “Lifeboat” - by twickabrick
3rd place: “LEGO Unikitty! “Throwing Down”” - by Brotherhood Workshop

All the winners have been contacted and the prizes should be arriving shortly.

Thank you to everyone on BiM who either submitted or got the word out about the festival. We really appreciate and hope to see more BiM members submit next year!