Hello all,
this is my 1st post here. I am glad I found and joined this forum. So many talented brickfilmers here! I hope some day I will achieve that level of animation!

I am making LEGO Star Was fanfilm stop motion animation. I wan't to quit my job to focus only on making this film!

I started crowdfunding campaign on Indiegogo. You can find there much more info (text, images, video), very simple test teaser/trailer and you can support it there. Link:
https://igg.me/at/escape2

P.S. And for those who would like to read even more there is some kind of press-release text here:

SYNOPSIS
Escape – Episode II is a big Star Wars fan production. It is LEGO stop motion animation with a totally new story from the galaxy far, far away.... Empire forces led by Darth Vader are on the hunt for a Jedi Knight who survived the Jedi Purge. It is an  animation full of great adventures with rebels, Empire and bounty hunters. Filled with great locations and spaceships. You will meet both already well known characters and a new heroes.

Story is told with epic shots in beautiful custom brick-built sceneries and with dynamic action scenes.

Animation will be available for free to watch on YouTube.

The pre-production of animation is almost complete and now it is going into production stage and looking for funding via crowdfunding at Indiegogo.

AUTHOR
Dominik Skarbek-Kruszewski aka Kalais is a professional graphic designer, photographer and film maker. He is also a big fan of Star Wars and LEGO! He creates custom models, dioramas and animations. He made several LEGO stop motion videos including commissioned videos for the LEGO Group. You can view his works at YouTube, LEGO Blog, LEGO Life App, The LEGO Batman Movie DVD/BLU-Ray and they are even displayed at Ninjago City buildings at The LEGO Ninjago Movie.

FUNDING
He started this project 2 years ago. Stop motion animation is very time consuming. Besides pre-production (scenario, storyboard, animatic, designing everything, building scenery etc.) you need to take a lot of photos. Usually few seconds of the animation can take you the whole day of work. Running time of Escape – Episode 2 will be around 10 minutes and making it after work would take him another 2 or 3 years to finish...

This is why he would like to quit his job for 1-2 months and spend all his working time on the making (and finishing) this animation.

Also the crowd-funding money would get him better camera/lens, professional software for stop-motion animation, some additional lights and some more LEGO bricks for the scenery.

P.S. Will be split to more posts since I got message for every 2 images

Too more links in message. Allowed 2 links. Reduce number of links and post it again. 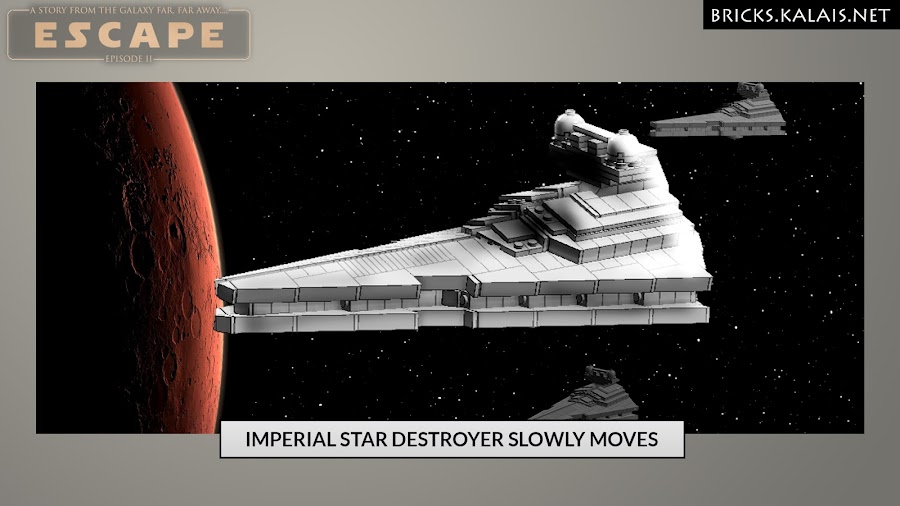 Wow! That looks massive! I am looking forward to seing more of your work.

BEAUTIFUL MOCs my friend. I'm excited for your project!

Wow! That looks massive! I am looking forward to seing more of your work.

BEAUTIFUL MOCs my friend. I'm excited for your project!

I will make whatever I can to finish it

This looks fantastic! Keep up the good work!

This looks fantastic! Keep up the good work!

Hello all!
Thx for all donations! There is still a lot left to reach the campaign goal. Even 1 USD can help so if you like this projects please help it!

Btw. I made some test scene yesterday. It was shot in 12 Frames Per Second, instead of 24. If campaign fail I might consider shooting whole movie at this frame-rate to save time and lower the budget.

P.S. I also tested Lightsabre blue light (made with external (placed behind the scene) LEDs), but I am not sure I will use it. It gives some blue/purple lightning to the scene and I am not sure it look good. Gives some kind of light flicker. What do you think?

I really like the extra light on the lightsaber. Treating them as actual light sources was one thing I thought The Force Awakens did really well. Go for it!

However, be sure the angle of light and resulting shadows matches the angle of the the lightsaber in relation to his body.

If the lightsaber is in front of her, the back of her cape (realistically speaking) wouldn't get any light on it.

Oh, it is incredible! It's like a new, maybe even better, version of Star Wars

Hope you will keep on making such fantastic things

I really like the extra light on the lightsaber. Treating them as actual light sources was one thing I thought The Force Awakens did really well. Go for it!

However, be sure the angle of light and resulting shadows matches the angle of the the lightsaber in relation to his body.

If the lightsaber is in front of her, the back of her cape (realistically speaking) wouldn't get any light on it.

You are right with the angles. It was just quick test

Oh, it is incredible! It's like a new, maybe even better, version of Star Wars

Hope you will keep on making such fantastic things

The work is in progress

Anyway, when I was making Escape - Episode 1 I had very limited number of bricks and wanted to create this Jedi-space-samurai-type of character. I ended up with version 1. Now I have a bit more bricks and I am thinking about changing hair to newer molds. What do you think? Which one is the best in you opinion? 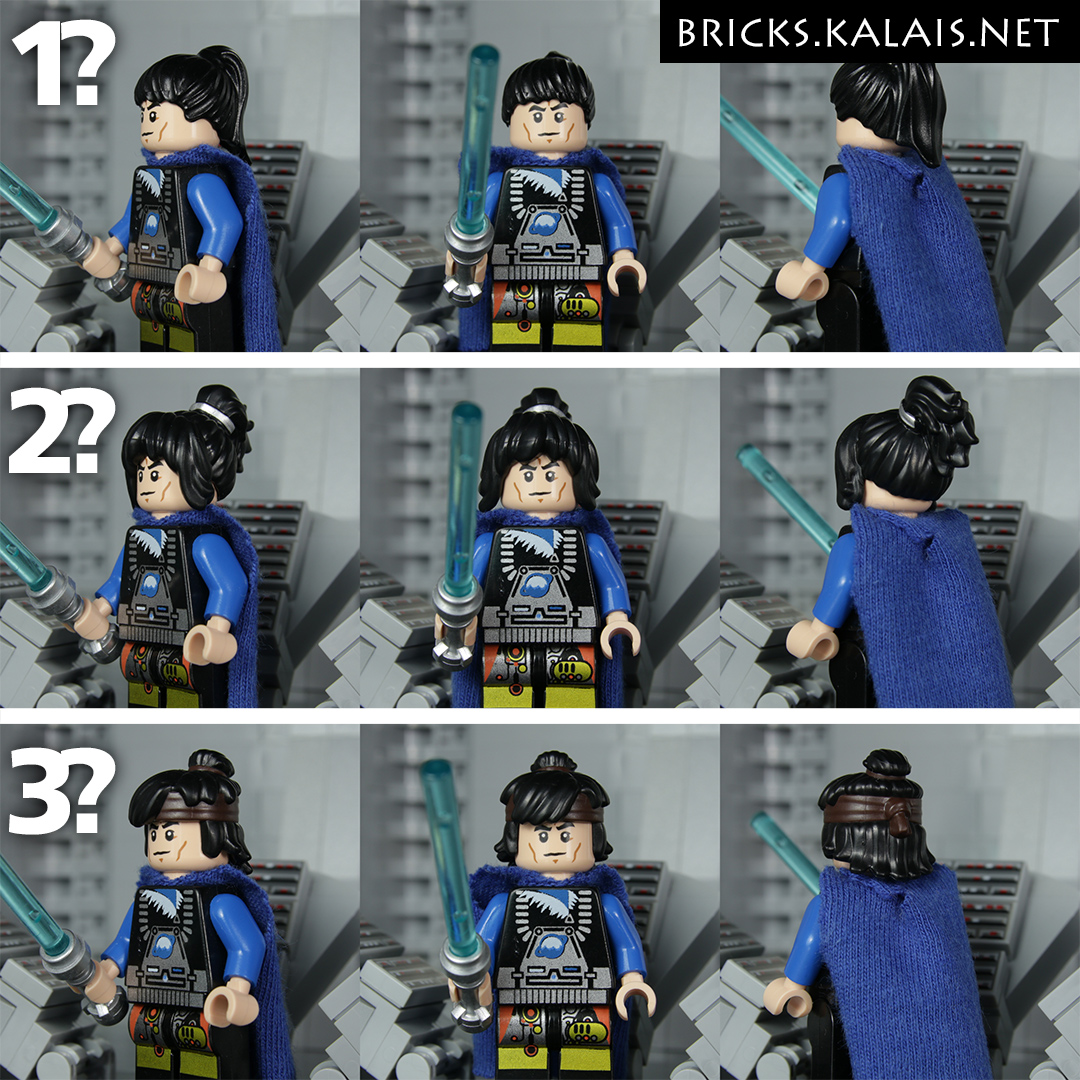 Version 3 is by far the best, in my opinion

I second what William said!

Yeah 3 for sure. Way more badass than the others. 2 looks like Rose Tico.

Thx guys, 3rd version with some more modifications will be final

Hello,
first of all I wanted to thank you all who supported my project! You are awesome!

And straight to the point - I decided to refund all of your donations.

$257 USD raised by 10 backers is just 4% of my goal and I think keeping it would be not fair to you. After all fees and and local taxes I would receive like half of that sum.

This kind of money will not speed up the process of movie making. As for equipment I managed to get almost all missing pieces. The only thing I need now is time.

So of course Escape II will be made. With no budget it will be much harder. But I will make it anyway

I will probably delete some scenes and make it with less frames per second to speed up process and make it cheap as possible.

If you would like to support this movie in less direct way please make purchase at my Bricklink shop. Big part of earnings from this shop goes into production of the brickfilm.

Thx for the support!
Kind regards,
Dominik aka Kalais

P.S. Everyone who supported project on Indiegogo will get constant 10% discount at my Bricklink Shop for 6 months (till 1 July 2019) for all loose LEGO parts! Please send email to the [email protected] with name and email used on Indiegogo donation and your bricklink account name to receive the coupons. Thanks!

Glad to hear you're going to stick with it. Creativity can solve a lot of budget problems, so get extra creative! Trim where needed and fake it where you can. There have been many great brickfilms done with zero budget. I know it's easy to look at some of the big budget stuff by Brothers Workshop and Digital Wizards and aspire to that level of epicity, but you'll be surprised what you can pull off on your bedroom desk with a little extra effort! Keep us posted