I am by no means the expert on this, so if anyone with more experience has anything to add to this, please do!

Microphones -
There are several main types of microphones and each type is designed for a specific purpose. The more you know about what it is and what it does, the better able you will be able to use it!

Note: I'm lumping in cardiod microphones with Omni-Directionals as they do capture from more than one direction, but they capture BETTER in front of the mic (semi-directional). Cardiod refers to the shape of the audio-capture pattern, it looks like an upside down heart.

What makes a microphone capture sound?
Sound is vibration of molecules that our ears capture and our brains interpret as sound. So when we are speaking into a microphone the microphone has a thin membrane (paper, metal, or otherwise) that is sensitive to vibration of air molecules like our eardrum, or any drum in fact (If you ever yell directly at a snare drum, the drum head vibrates and makes a cool noise).

Sound vibration is picked up by the membrane and it generates very low strength electrical signal, which is then boosted/interpreted by your software/amp. This signal transmission process is reversed for the playback through speakers. A speaker can actually be used as a microphone when plugged into a microphone spot! I don't recommend it for sound capture though.

What microphone do I need?
What kind of sound are you wanting to capture? A human voice? A car horn? A loud deep hum coming from your transformer in the back yard? Your cat meowing while your family is watching tv in the other room?
We talked a little about what types of microphones there are, now let's talk about what they do.

Shotgun Microphone (Directional) - This microphone has its capturing membrane in the middle of a long tube. The back of the tube will generally have a battery and insulation to prevent from capturing audio behind the microphone. The "barrel" of the mic will have sound absorbtion down the length of the barrel inside of it (like a silencer for a gun). This ensures that the only sound that the membrane captures is straight ahead where you are pointing the barrel. If your sound source is not facing the mic and/or the mic is not pointed at what you are trying to record, you won't get good quality audio!

Dynamic Microphone (Cardiod) - This is the handheld mic that you see used onstage a LOT. It is resistant to moisture and has a high feedback tolerance (researched that on Wikipedia). It is good if you're going to be rough on your microphone, it's designed to work for a lot of things, but don't expect it to capture sound from across the room. You have to be right in front of it to get good sound.

Condenser Microphones (Varying Types) - Condenser refers to the method by which the electric signal is generated that travels to your software/amp. Essentially it is a highly sensitive microphone. Sensitive is a trade-off. Better sound quality, more prone to damage if not handled properly.

You really do get what you pay for.
If you are looking to invest in a microphone, choose carefully. Microphones have dozens of types of connectors, some require batteries, others use phantom power (from the computer or amp). Some microphones use connectors that require a sound board to act as an intermediary between the microphone and your computer. How are you wanting to connect your microphone? If you have a microphone jack on your computer, do you have software that can capture and record audio? Are you going to capture audio through your camera? What type of audio-in port connector does your camera use? 1/8th inch rca plug (typical headphones plug) is the most common plug for computer ports; it would be a shame if you bought a lovely dynamic mic that only uses an XLR connection!

Consider what equipment you HAVE (and how long you are going to keep it), and what types of connections they require before buying the microphone for your set-up. An investment is exactly that. The more money you put into buying a microphone the better it will be at doing what it is designed to do. As a general guideline, I wouldn't spend less than $50 on a microphone, as it is highly likely to be garbage. Expect to spend at least $80 on each microphone you buy if you want results! Some microphones cost as much as $500 and more.

I have my microphone, now how do I USE it?
The act of capturing audio is a balancing of several factors.

To illustrate: You are recording a witty monologue by Spidey as he fights the lizard down in the sewers.
You want Spidey's audio to come through crisp clean and clear. So SPIDEY has to be loud enough in front of the microphone. If the volume that the microphone is RECEIVING is turned way up it will be very distorted, even though you turn down the volume at which your audio is being RECORDED.
That is when you have DISTORTION.
If you are recording with a camera and microphone and your mic doesn't have its own volume control, then essentially your setup combines receiving and recording which reduces flexibility to provide quality recording.

Maybe Spidey is speaking quite loudly, and you compensate by having him step back from the microphone. Wrong choice! Now your recording sounds like he's speaking in a box! That box is the room itself, and you now have REVERB. Correct it by moving your sound source closer to the microphone.

Now Spidey is making a booming sound every time he says he's going to Punch the lizard. It's the letter P. When we make that sound we send out a concussive force of air that vibrates the microphone's membrane. To correct this, place something between the sound source, and the microphone. You can buy pop-filters, windscreens, or put a sock over the microphone. I bought a pop-filter from best-buy for $10.

You want Spidey to hear his voice as he records, so you turn on your speakers. A terrible sound of FEEDBACK screeches out of the speakers. The microphone is capturing it's own sound of being on. Turn down the RECEIVING volume to correct this problem.

When I play back the audio, everything is quiet! It needed to be recorded at a louder volume. Redo it!

When I play back the audio, there is a low hum or a high pitch hiss. Hums are from machinery, possibly the computer, or if your camera uses mini DV tapes (I've experienced this) the camera itself can make enough noise to be audible. Adjustment of the equalizer to compensate for this is a LAST resort. Try everything you can to minimize it and have your audio source be louder than the intruding noise. Then in post-production find the equalizer and figure out what frequency the hum is and knock it OUT. Basic equalizers are just a low-mid-high setting, advanced equalizers give you greater control over the different frequency volumes.

When I play back the audio there is some background noise like a radio station, and I made sure not to have the radio on while I recorded! What is going on? Unfortunately if you are recording near a radio station the cords themselves act as radio antennae and will pick-up RF transmission. There are mic cords that are sheilded (XLR cables) but this usually requires a separate sound board to plug into. It is a costly solution to a unique problem. The best option is to have your sound source speak up. (This sucks btw. I experienced this when I was working for my University TV station, which was two floors above the radio station)

The ideal scenario for recording is...

Remember, that is the IDEAL scenario, your job for recording should be to get as close as you can to the ideal scenario with what you have available to you.

Okay, That is all I can think of off the top of my head.
Fill in anything I missed please and thank you!

Re: Microphones and Audio Capture

Thanks for posting this great guide, it's stickied. I'll edit this post in a bit and add some common mic choices and why you would get them.

Edit
(I am not an audio professional and I am sharing what I have learned about audio over the last decade of film making, let me know if I should edit or update any of this information or if any of it is misleading)

What kind of recording setup will you be using?
Before you can choose a microphone for recording you need to ask yourself how you plan to be recording sound. The cheapest and easiest option is to record directly into your computer. There are a few options for this, you can use the 1/8" mic in port on your systems sound card, use a USB mic or get a USB audio interface.

Choosing the right mic
A lot of people use shotgun mics for all there recording needs but if you plan to do a lot of vocal recording and don't needed the directional capabilities of the shotgun mic you may want to considere a large diaphragm mic, never hurts to educate yourself

Removing background noise
One way you could try to remove unwanted background noise is buy or build a refraction filter, a pre-built one will probably run from $60 - $100 and should remove a lot of unwanted noise generated from behind the mic. You can see a home made refection filter in the BIM Documentary teaser in KG's works space at 43 seconds. A refraction filter would also be a great option if you are getting a lot of unwanted reverb from a non-ideal recording space.

Another thing you can do to reduce reverb is make a blanket cave for recording, this should remove a lot of the sound reflections of hard surfaces like walls. Just hang a few on some light stands or tack them in place, try to avoid recording near windows or on wood or cement floors, carpet is the best. 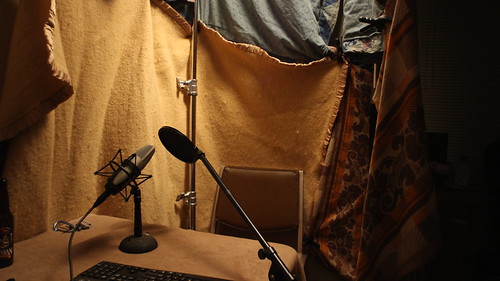