Lately I've been seeing more people using a shorter aspect ratio (black bars on the top and bottom of the screen) for their films, and I was basically wondering - why do people do this? Does it look nicer to have those black bars? And what aspect ratio is most commonly used to do this?

The aspect ratio is actually greater; and it's 16:9.  There are many widescreen processes, but 16:9 is the new HDTV standard.  (1920x1080, and also 1280x720)  The black bars at the top and bottom of standard screens are there to preserve the aspect ratio on a standard screen.  Black is used for contrast.  Nowadays, as people are transitioning to 16:9 TV sets, TV programs, or pre-widescreen era movies, which are shot usually at 4:3 ratio, appear on widescreen tVs with black bars on the LEFT and RIGHT, to preserve the aspect ratio of the original broadcast.

I know all of that, but I was wondering about aspect ratios that are shorter than 16:9. Thanks, though, that's a nice, simple explanation.

Well, we do that so that our films match the aspect ratio of movies, (1:2.35) and hope the cinematic feel that comes from that will subconsciously make people love our films and compare them more to real movies than to just quick cartoon-like shorts. It helps people to take them more seriously, and adds a professional look.
Plus, it's cool and I like it.

I think the various other aspect ratios are covered in the old CINEMANIA 97 and 98 programs.  Most of the reviews are from Ebert, but they fortunately have other critics in the mix too.

It also helps if you are doing subtitles:) . I like it because like what pritchard said, it gives a "hollywood" theme and look to your film. Its also very fun to use;). If you go the anamorphic route (and have a DSLR), i STRONGLY suggest you download Magic Lantern. Its a third-party firmware.  It has a cine scope anamorphic letterbox so you can appropriately shoot your films.

I used the aspect ratio that Pritchard Studios mentioned in my BRAWL 2014 film. It cuts off a lot off the top and bottom of your frame, so you'll have to take that into account when you build sets and film. It does give a cool cinematic look, but you may want to use it cautiously. It can also make your film look really cheesy if you use it incorrectly.

2.35:1 ('Scope') became popular in the 1950s when theatres wanted to do something television couldn't, by having larger, wider screens that fill more of the viewers' peripheral vision. I'm pretty fond of 2.35 myself, though I think 1.85:1 is generally easier to frame shots well in. 2.35 lends itself to impressive, wide landscape shots. I think that kind of thing is kind of hard to come by in LEGO, though it's certainly something I aimed for in Unrenewable which is why I went for the wider ratio.

I know it's a little "odd" looking to see black bars on the top and bottom of a brickfilm (or any film, for that matter), and, compared to the standard 16:9 "fullscreen" films, it's easy to assume that films with the black bars are "loosing" information, cutting off the viewer from part of the frame. However, this isn't true.

Using a "full screen" method is ok, but, can sometimes distract viewers when a lot is going on in a single shot. Using a "wider" aspect ratio more closely matches the view of the world we see through our eyes - two circular objects that, in turn, project a really wide depth field for our brains to intake.

A great video on this issue is here: TCM on Widescreen and Pan and Scan

It talks about a lot of classic films, and why making them "fullscreen" for television actually is "deleting" part of the film - vise versa of what many average film-watchers would assume. Just because a film fully fills the youtube video screen, or your computer screen, doesn't mean that the film is actually showing you more. - In most cases, it isn't.

Picture a car, perhaps a limo or a tank - something closer to that than a smart car. If you're filming a film in 16:9 aspect ratio, you'd have to zoom out so far, just to get the whole vehicle into frame, that you'd have a lot of "unused" space above and below the limo or tank - something not exactly appealing to the eye when watching a film. However, crop the top and bottom, and you've got a solid looking shot - the vehicle in question is perfectly within the middle of the frame, with no distractions around it.

This one, I originally shot intending to crop to 2.35:1, but didn't. Notice that you can see past the top of the set when the frame is not cropped for a cinematic view: Man of Steel test
Sure, you could argue that you're seeing a "fuller frame" however, I, as the director, didn't intend for you to see the top of the set, and, seeing so makes the video look more amateurish.

This video, on the other hand, just shows one pic throughout. However, notice how much more of the "world" (map) that you can see vs if I'd cut the sides off to remove the letterboxed effect. (Thus, loosing some of the map): Johnny Thunder Map
Without a wider view, the edges of the map (and text) would be "lost."

Generally, action films, or other films after the 1950's (as Smeagol nicely talked about above) tend to use 2.35:1, a ratio perfect for eye or mouth close ups in intense scenes. However, romantic films, comedies, and other such films use the other standard of 1.85:1 - which is much better for facial, or head and shoulders close-ups.

I use 2.35:1 not only to achieve a more "cinematic" look, but, my film projects tend to be much more action or adventure oriented - thus calling for wider shots. I have even gone so far as to experiment with even wider aspect ratios, as, I personally just love the look of wider shots compared to 4:3 or 16:9 shots - the latter two being a staple of most brickfilms. My mentality is that if my film looks better, and is better, then it will stand out more. And, there's no better way to set yourself apart from "the rest" than to go for a wider frame.

I just had a breaf facetube converstion about this very thing, and why I don't shoot wider then 16:9 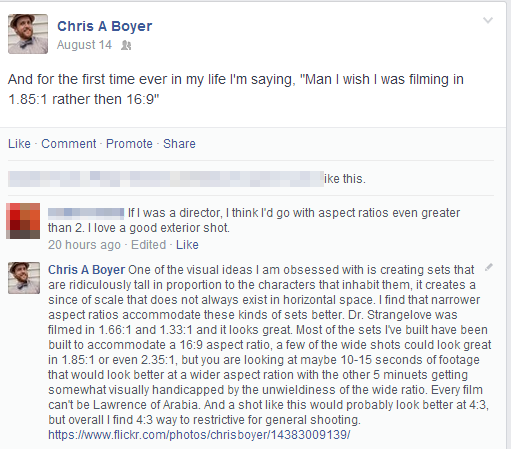