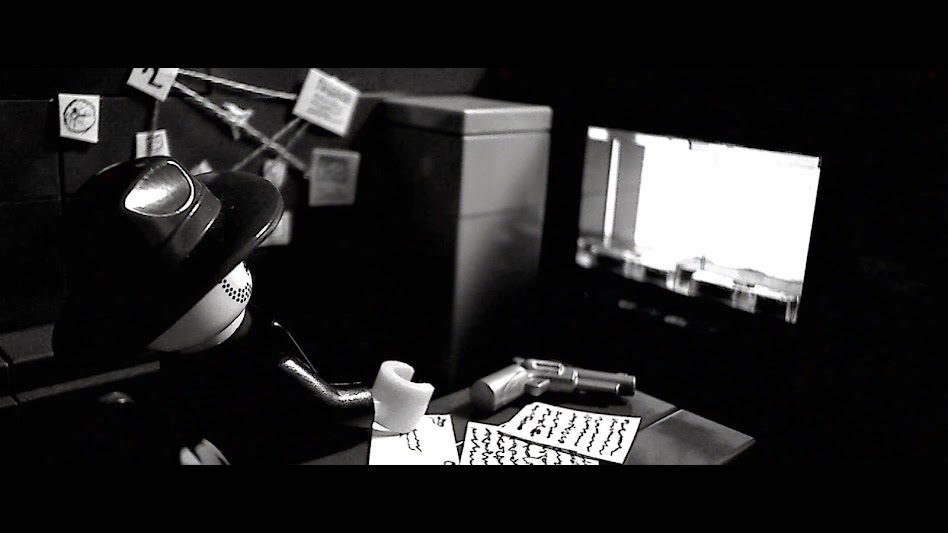 Thank you all for entering, all the entries were simply fantastic! It was definitely somewhat of a struggle to choose a winner.

Without further adieu, the winner of this week's challenge is, HarryAndBillyBrick! This means that you will get to choose next week's theme. Both frames really captured the essence of Film noir. The positions of the minifigures really gave me the illusion that they could have actually been moving. Also, in the second picture, the shadow of the mysterious figure with the fedora was executed extremely well.

In second place, FlyingMinifig! I definitely prefer the first frame. I really admire all the details you included in the room space. The light coming through the window was a perfect touch. Also, kudos on using a Neo-noir style.

In third place, KingLemuel! I really enjoyed the use of non-LEGO elements in your frame; namely, the paperwork on the minifigure's desk and the string of leads of the left-hand side of the frame. And of course, the black and white was a nice touch.

In fourth place, Aiwha! Awesome job on the minifigure design as well as the set design. Although it's simple, I thought the brick wall look and the table were a nice component to the frame. Also, the one light source coming from the left side of the picture made for a very intriguing look.

Again, great job to everyone! All the entries were very difficult to judge in the sense that they were all so good!

Thank you for choosing me as the winner and thank all those who have participated.

Now it's my turn: the new theme is "rising", you can focus it as you want.
The deadline is next Saturday 28th June.

Well, I haven't see any movement here in the last days. Maybe should I change the theme? I thought other themes like "Historical moment", "War" or "The world's end". Let me know if you want to change the current theme to one of these.

What, no dude. I'm entering. You can't just change the theme if the deadline hasn't passed.

Okay, okay, I didn't know that, sorry. The theme is NOT changed: "rising". Looking forward to see your entry.

The deadline was yesterday, I can extend the deadline but there is someone who is really interested?

This thread has died, shall we revive it again?

Personally, I think a new thread is in order. I'll start one soon. Sometime it's best to let these bloated threads die and become reborn.