AE Write On HELP (SOLVED, can be closed)

Forums - Bricks in Motion » Post-Production » AE Write On HELP (SOLVED, can be closed)

Topic: AE Write On HELP (SOLVED, can be closed)

EDIT: Nevermind, I just found a method that works! It's more time consuming but produces a highly accurate result. I ended up having to go into photoshop and seperate the individual strokes of each letter out piece by piece and then animate the reveal using Generate Stroke.

Hey everyone, I'm working on a small motion graphics piece for my Church's Christmas Production and I need some help figuring out how to preform a "write on" effect with this text that I have. It's not an actual font, rather it was a .TIF file which I turned into a vector graphic in illustrator using the Trace Image feature. What I need is for the text to look like it is being written on, simple as that. I have done numerous searches and looked around to try to find a method that would work, but none of them have. Here are the things I have tried:

- Creating a path following the direction of the text and using the "Generate">"Stroke" option to reveal what's underneath.
- Using a white stroke that covers the text and animate the start and end points.
- Using the actual "Write On" effect.

The problem I am encountering is due to the varying width of the calligraphy and the areas where the strokes overlap. Changing the width of the stroke overtime doesn't work, as it affects the entire stroke and not just a section of it. Does anyone have any experience in this area that could offer a solution? Thanks! 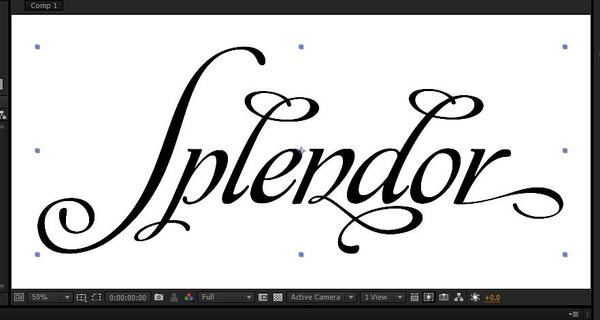 Forums - Bricks in Motion » Post-Production » AE Write On HELP (SOLVED, can be closed)